An interview with the i360’s architects

This week marks the 15th anniversary of the London Eye – designed by the team behind the Brighton i360 and still the UK’s most-visit paid for tourist attraction.

To celebrate the landmark, we caught up with architects David Marks and Julia Barfield to find out more about how they turned a dream into reality and also how excited they are about the opening of the i360… 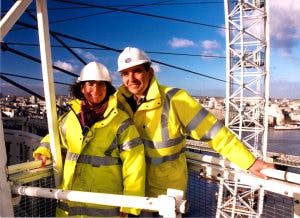 David Marks and Julia Barfield, the team behind the London Eye and Brighton i360

Let’s start at the beginning, how did the London Eye come about?

David: “It started with a competition launched by the Sunday Times in association with the Architectural Foundation in 1993. They were seeking ideas for what were we going to do, as a nation, to celebrate the Millennium.

“There was no specific brief, no specific site and certainly no specific commitment to actually build anything, but there was a commitment to publish the winning designs in the Sunday Times. We thought this was a good opportunity to get some publicity for our fledgling practice and bring ourselves to the attention of potential clients.”

David: “There was a complete free hand, it was an ideas competition. There was an inspirational article talking about, the Great Exhibition and Crystal Palace, the Exposition Universelle and Eiffel Tower in Paris, the Festival of Britain and Dome of Discovery – about great events, great modern age celebratory events. What we had to consider was what was the Millennium all about, how were we going to celebrate it and what would be an appropriate landmark.”

So why the wheel?

David: “Our idea was to provide London with what many cities around the world have but London lacked – a publicly accessible vantage point to see the city as a whole, and from a fresh perspective.

“We wanted to create something accessible to everyone. The idea of the wheel allowed us to create an effortless way to get a lot of people up very, very high.”

Julia: “Also we thought it should be about celebration. It was to mark a particular point in time so it should be a project which should be uplifting, so that was part of our criteria that it should be something out of the ordinary and something which would put a smile on people faces.”

So what happened next?

David: “Well, we didn’t actually win the competition, nobody did. But we thought, why don’t we just try and do it anyway?

“It took six and a half years. I think most people at the time didn’t take it, or us, seriously and there was a fair amount of opposition to it initially but that changed radically over time.

“We had a lot of challenges to overcome but we were always convinced we could do it.”

The London Eye really captured the imagination of the public when it was floated up the Thames to its site by County Hall on the South Bank.

David: “Yes, there was a fantastic buzz and excitement around the project. When it didn’t go up the first time and Richard Branson floated a balloon over the construction site with a sign on it that said “British Airways can’t get it up”, apart from being quite funny, I think it dawned on people how challenging the whole project was.

“We were, I believe, actually lifting the largest object ever lifted from vertical to horizontal, and we were doing it in the middle of London, right in the centre of the city.

“This was a project with huge engineering challenges and a lot of engineering innovation. It was almost Victorian in its scale, vision, and its engineering.

“For people to see something like that in the centre of the city, lining the bridges and the embankments to watch was just phenomenal. There were approximately one thousand people involved in the construction in one way or another from all over Europe, pulling this thing together. It was a fantastic feeling that this was coming together, we had an amazing team and amazing support.

“Everyone who was involved feels tremendously proud of their involvement.” One of the benefits of the London Eye is that it has breathed new life into that area of London, would you say that is true?

Julia: “Certainly. It has transformed the South Bank.

“When we were doing it there was a statistic that apparently 1.5million people a year used to go across Westminster Bridge, get half way across, take a picture of Big Ben and then walk back into Westminster. The riverside walk between County Hall and the Tate Modern used to be deserted. Now it is one of the best walks in London and it is absolutely packed.”

Presumably you envisage a similar effect in Brighton with the i360?

Julia: “Absolutely. People do like large engineering structures. There is a fascination in that kind of scale of ambition and engineering. People like to get high up and make sense of things. It is like a mountain in the middle of the city but you don’t have to do any climbing.

“The 360 view is really important as well. What we did in London was drew a circle around London and found its centre which is basically there on the south bank. It is the epicentre of Greater London.”

And something which can be enjoyed by people of any age?

Julia: “Yes. What we really like about it is that Londoners have taken it to their hearts. It isn’t just meant for visitors, it is for Londoners to appreciate their own city. The fact that one per cent of ticket sales go to local community, like they will in Brighton, means there is a benefit which goes to the local community, and in perpetuity.”

Talking of Brighton, how did the i360 idea come about? Were you conscious about moving away from the wheel design for your next project?

Julia: “After the London Eye lots of people came to us and said we want one of those, we want a wheel, but we quickly realised there are not many cities which can support something of that size and scale of construction costs and also what it takes to run it.

“We then came up with the idea of the i360 which basically replicates the experience but is much more affordable for many cities around the world.”

David: “We did look at lots of UK cities but Brighton is much better than anywhere else we looked at: It was an established tourist destination; there were other attractions there but not too many and no other observation experience; there was nothing there to compete with it; it was highly accessible – 30 per cent of the population of England lives within a two-hour reach of Brighton; it gets lots of overseas visitors; it has a brilliant international brand; it is a cool place; there is the beach; it is a different experience to London; and it is a city with a history of innovation and is more forward looking than any other seaside city or town in the UK. It was a fairly obvious choice.”

And it will bring other benefits to the city?

David: “This is not just a money making exercise – although it will of course generate money for the city and its investors – but it does much more than that.

How did you come up with the design?

David: “It starts in the imagination, it starts with a dream and then you design it with other design professionals and then you make it real. You work with contractors.”

How the i360 will look when finished

You’ve just been to visit the team in Holland who are helping with construction, how was that?

David: “It is really impressive to see it being built. The cans are all in different stages of production, they’ve all had their flanges welded on, they are being painted. I saw the bull wheel being mounted into the counterweight. There is a lot of working happening all over and it is fantastic to see it all coming together.

“It is a big piece of engineering. The nuts and bolts are big. There are bolts which are three metres long. The holding-down bolt frame assembly weighs about 30 tonnes. The whole tower with everything in it weighs about 1,200 tonnes. This is big engineering stuff. It is lighter than the London Eye but it is still very big and very impressive and it is fantastic to feel part of that.” 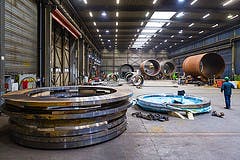 Construction of the i360 is coming along well

“We love working with engineers. They are the great unsung heroes of the modern age. We think the collaboration of sensitive architecture with brilliant engineering is unbeatable.”

Lastly, why the coast?

Julia: “The i360 is a bit like a vertical pier, that is why its position near the site of the old West Pier is so perfect.

“The point of a pier is to go out to the end and not look out to sea but to look back at the city and that is what the i360 does.”