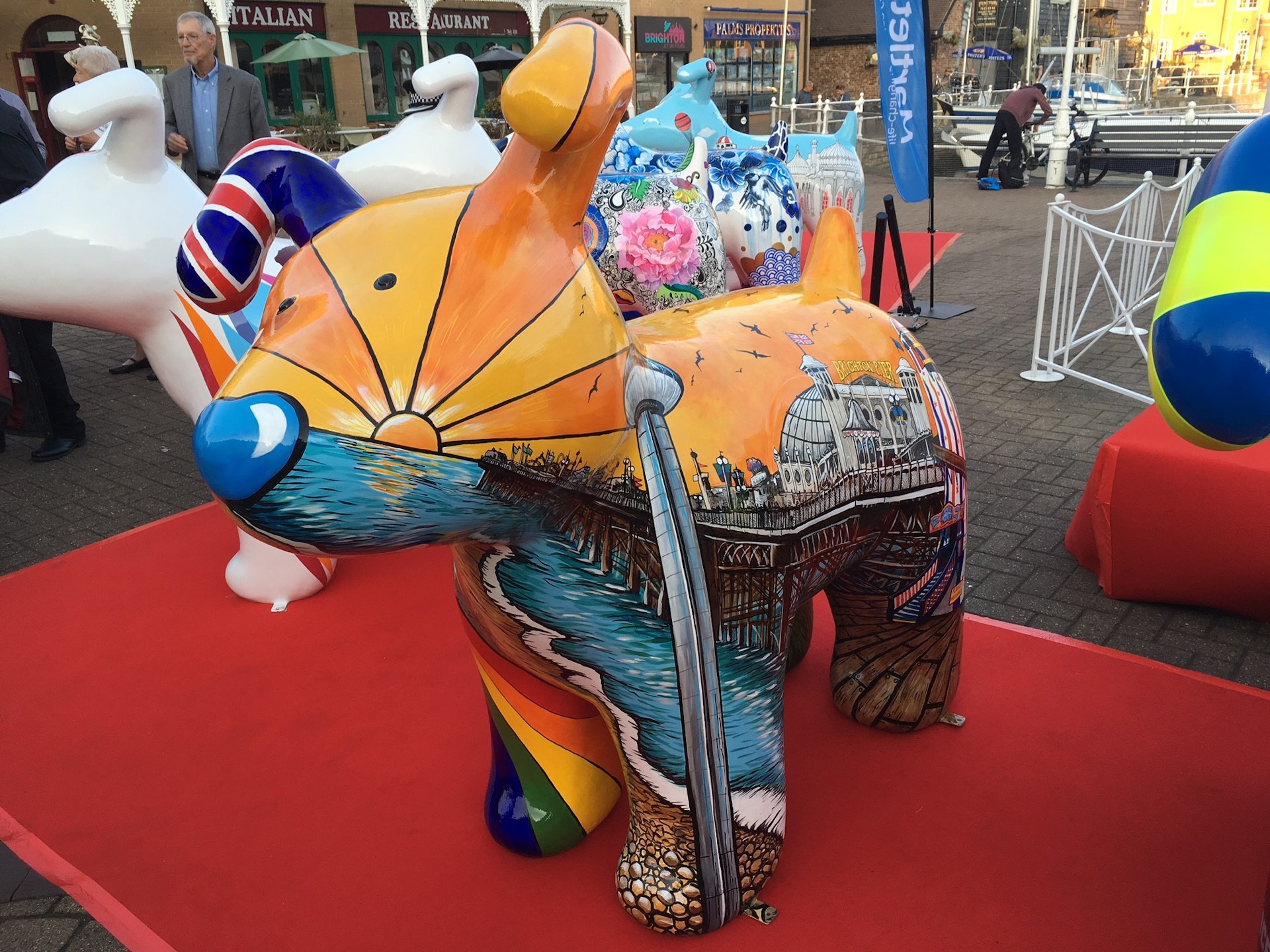 Our beautiful Brighton Belle Snowdog is located at London Victoria Station to promote the Snowdogs by the Sea public art trail in Brighton & Hove this Autumn. 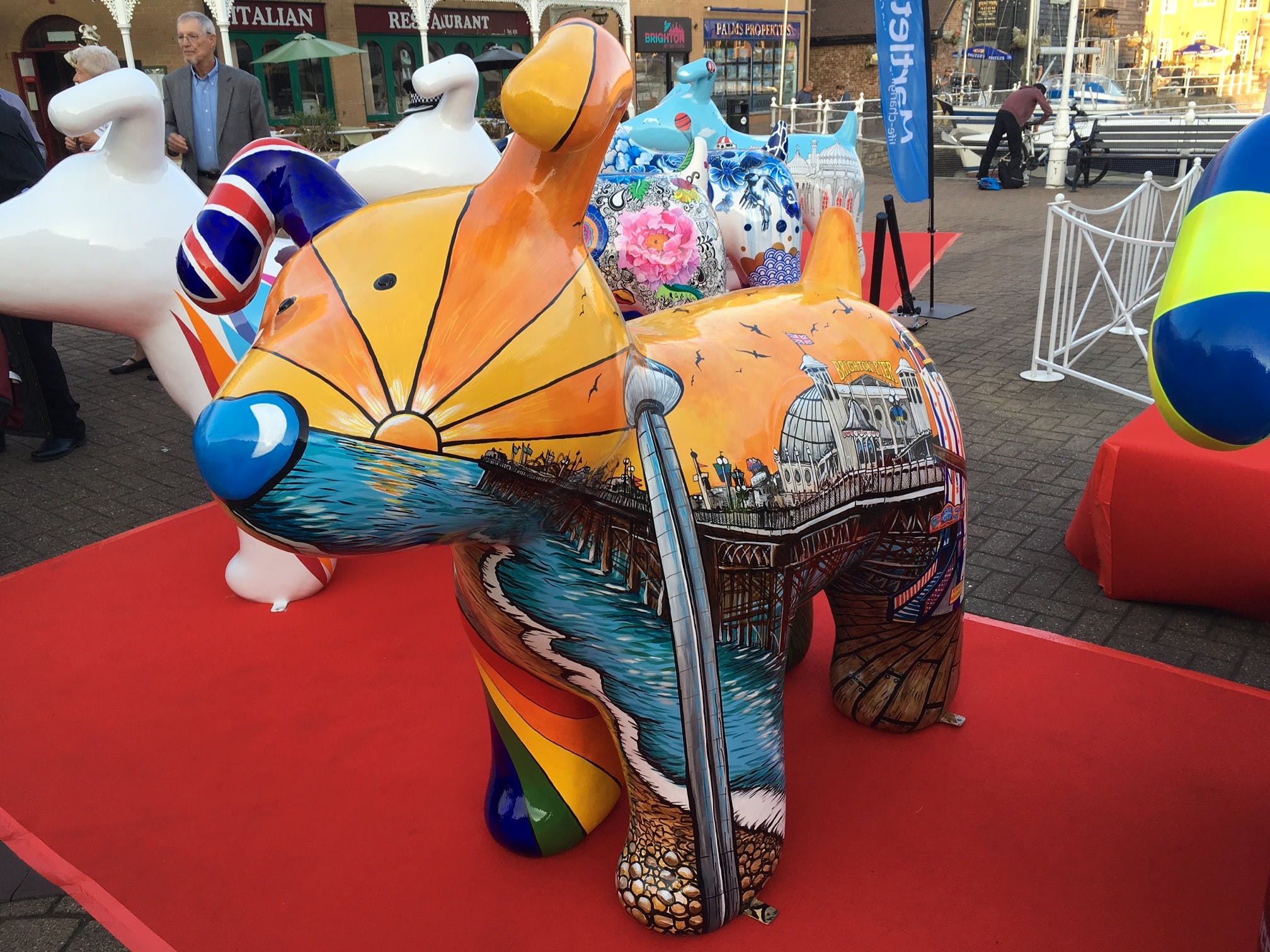 Brighton Belle is one of a pack of 45 giant Snowdog statues positioned around Brighton & Hove, creating a unique, interactive public art trail, Snowdogs by the Sea, which runs from Saturday 24th September until Sunday 27th November 2016.

Brighton Belle will remain at London Victoria Station for eight weeks to promote the trail, which is raising funds for Martlets Hospice, before returning to the city to be reunited with her pack. Happily ensconced beneath the escalators, against a Brighton-inspired backdrop, Brighton Belle features the city’s iconic architecture as well as its newest attraction, British Airways i360.

We named her ‘Brighton Belle’ in honour of the London to Brighton Pullman train which once connected the capital with the coast. Station-users taking a selfie with Brighton Belle and sharing it with us @BA_i360 on Twitter or @BA_i360 with the hashtag 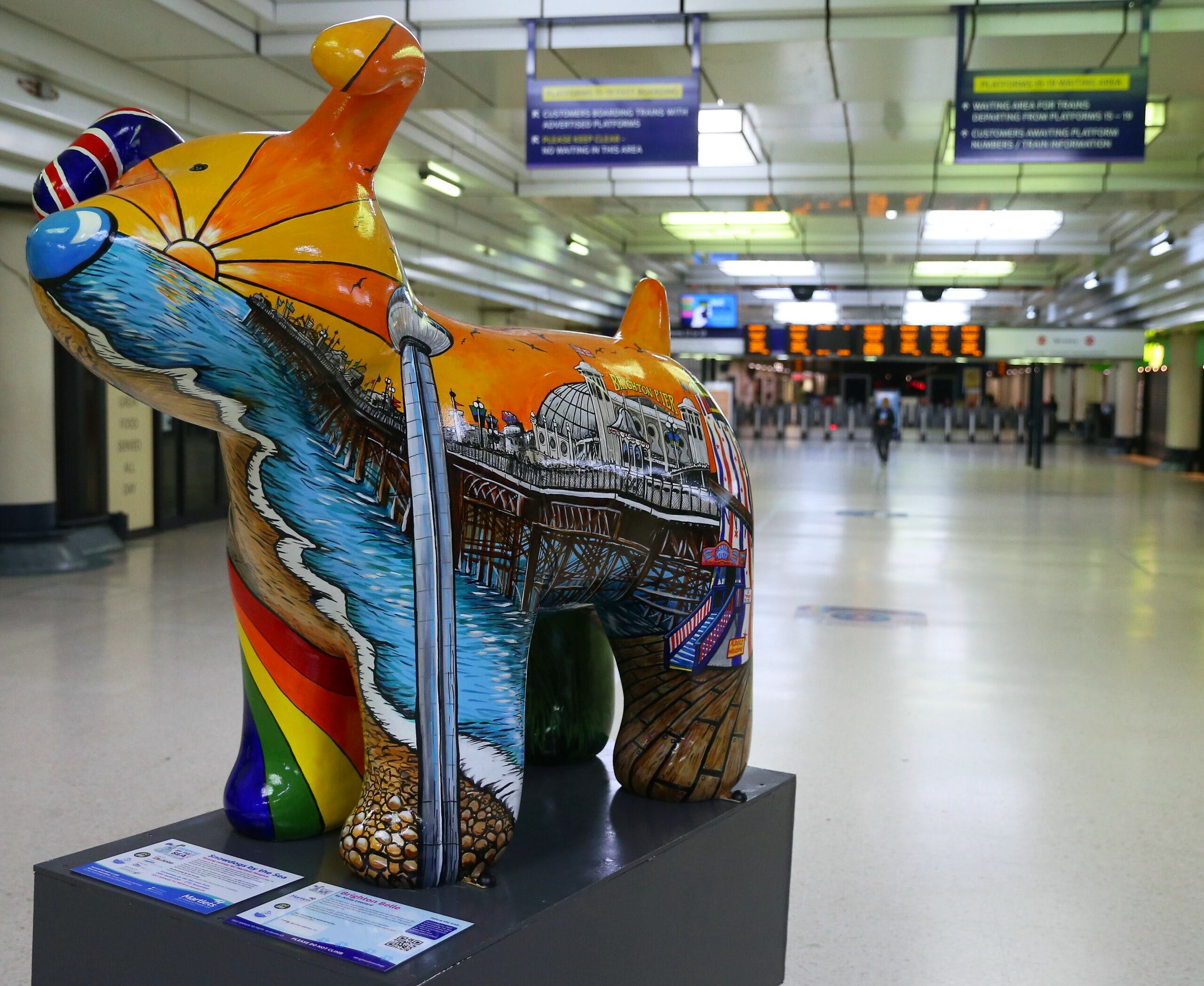 #helloBrightonBelle on Instagram, will be entered into a weekly competition to win a pair of tickets for British Airways i360.*

The magical sculpture trail has been inspired by the animated short film and book, The Snowman™ and The Snowdog, which was the sequel to the much-loved, The Snowman™, written originally by Sussex-based author, Raymond Briggs. It is being organised by Brighton charity, Martlets Hospice, in conjunction with Wild in Art, one of the UK’s leading creative producers of public art events. The idea follows similar projects run by Wild in Art in Birmingham and Bristol. At the end of the event the Snowdogs will be auctioned to raise funds for Martlets Hospice, which provides life-changing care for people living through a terminal illness in and around Brighton & Hove. Snowdogs by the Sea is expected to raise significant funds for the hospice and will attract tens of thousands of visitors to Brighton & Hove in the autumn.

Different artists have created each Snowdog and artistic inspiration has come from a variety of sources: from pop legends, such as Bowie (‘Bow Wow’ by Mike Edwards) and the Kinks (‘Lola’ by Devon Bhurke), to the Victorian’s puritanical desire to prevent naked bathing on Brighton’s fashionable seafront (Bathing Beauty, Judith Berrill). Brighton Belle was created by artist Jenny Leonard.

Snowdogs by the Sea is being supported by a number of Brighton celebrities. DJ Norman Cook, AKA Fatboy Slim, has commissioned well-known street artist, RYCA, to create his Snowdog (Boomer), whilst crime author, Peter James, has a police themed Snowdog in a nod to his bestselling series, Detective Superintendent Roy Grace.

Imelda Glackin, Martlets Hospice CEO said: “Having the British Airways i360 Snowdog at Victoria Station is very exciting, as, not only will it bring a smile to people on their daily commute, but, it will encourage even more visitors to Brighton and Hove and to the Snowdogs by the Sea trail, which in turn will benefit all of our Snowdog sponsors and ultimately the Hospice.”

Eleanor Harris, British Airways i360 CEO, said: “The Snowdogs by the Sea art trail is a fantastic opportunity to showcase the creativity of Brighton and Hove to locals and visitors alike, while also raising essential funds for Martlets Hospice. We are particularly excited that the British Airways i360 Snowdog, Brighton Belle, is at London Victoria Station to welcome passengers onto the Brighton train.”

*British Airways i360 will give away one pair of tickets every week for nine weeks (24th September 2016 – 27th November 2016) to the person winning the weekly ‘Selfie with Brighton Belle Snowdog’ competition.