With the Brighton i360 tower at full height and the cranes now gone, the team at Mackley have been working hard to return the site back to its original boundaries and give the beach back to the city.

For the duration of the summer we had to extend our site on to the beach to accommodate the 100m crane that would help us build the tower. The beach platform had to be strong enough to support the crane, 17 cans, the jacking tower, counterweight and jacking collar. 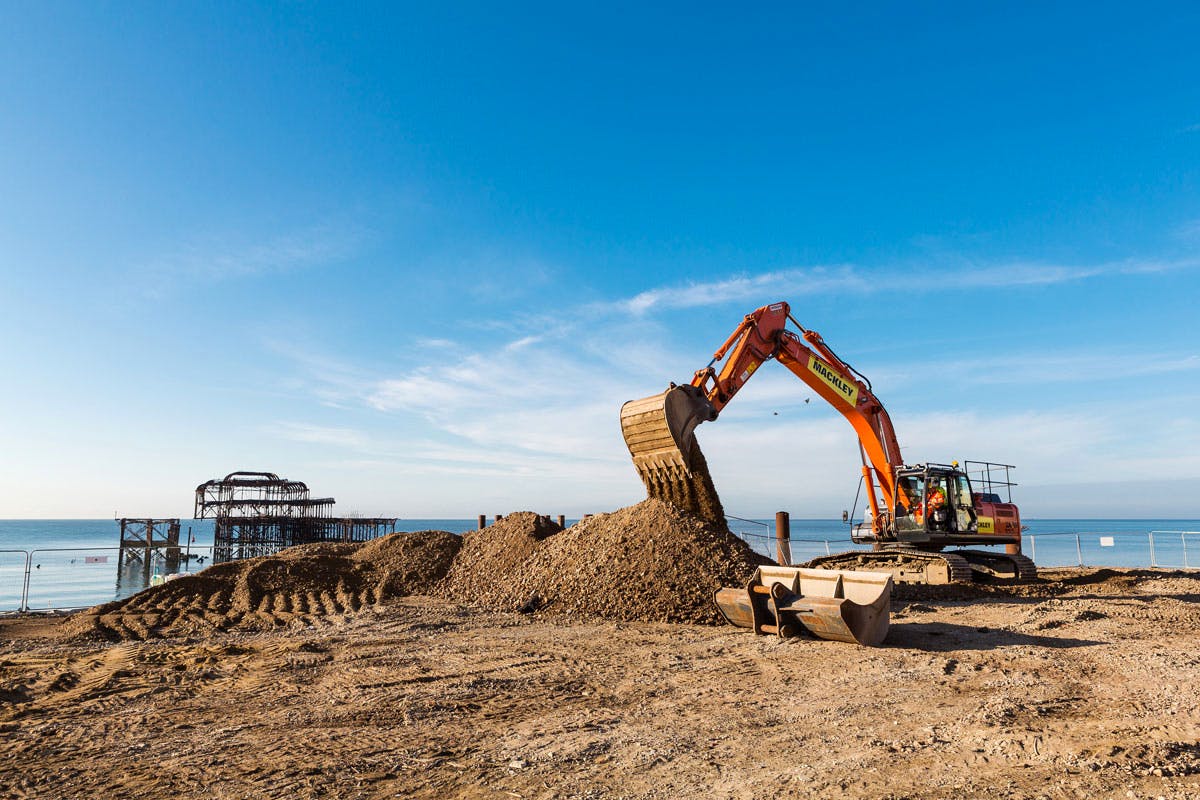 Excavated shingle was kept separate with a geotextile membrane

We are always keen to recycle materials where we can and the beach platform was the perfect opportunity to do this. We had to remove approximately 5300m3 of shingle from the site when we dug the basement of the tower and we were able to move it directly to the beach site to form a stable base for the crane. The excavated material was kept separate from the original beach with a separator geotextile and we retained the new shingle with wire gabion baskets.

The story did not end there. Waste Acceptance Criteria (WAC) tests, which determine where material can be deposited, had classified the shingle as ‘inert’ because of the high chloride content that is always evident in material that is in contact with sea water. The classification meant we would have to use a specific disposal site much further away when we eventually cleared the beach platform, significantly increasing our green impact. We all agreed that there must be another way and engineers HOP were charged with investigating whether the shingle could be reused right here in the city to help with the coastal protection.

What is coastal erosion? 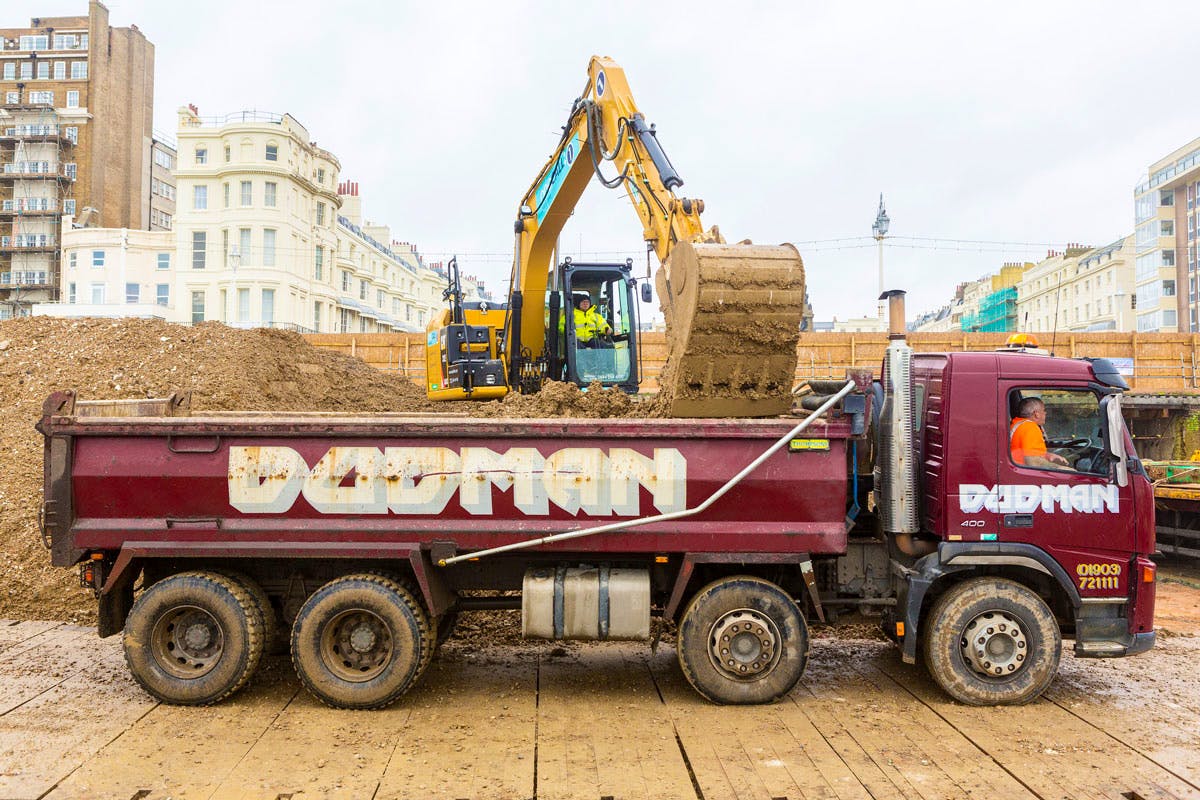 Every year wave energy erodes Brighton’s shoreline. The consequences of this are far greater than just the loss of our famous beach – the pristine shingle is also a crucial part of coastal defences and protects both industrial and residential properties.

We cannot stop erosion but we can help recover the beach through an annual programme to deposit shingle back into the water. Because of ‘ longshore drift’, an occurrence that sees the shingle washed along the coastline from west to east, standard procedure is to source shingle to place in the water further along the coast. As it washes down the shoreline the beach at Brighton gradually receives the shingle it needs and we are left with our pristine beach. 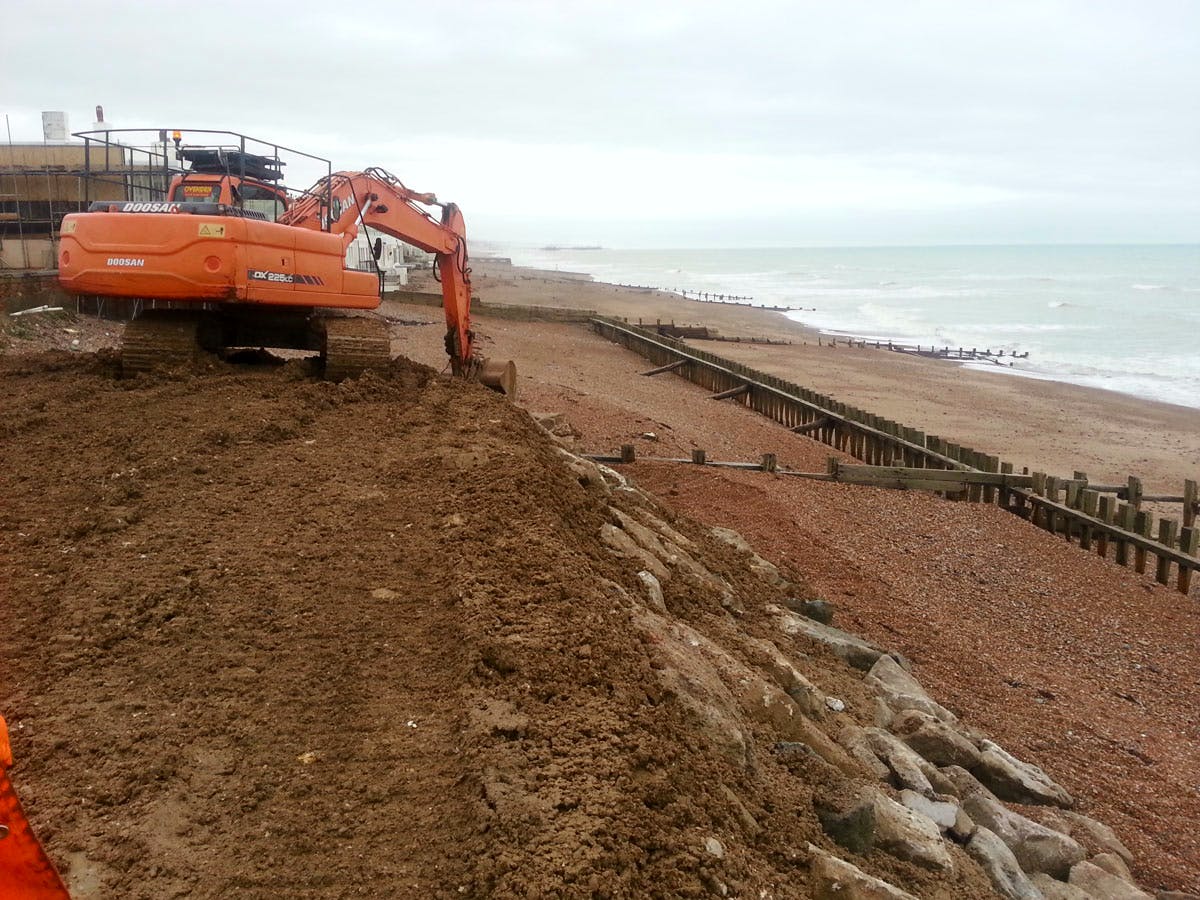 Some of our material was deposited at Southwick beach. Eventually it will be washed down to the marina

Over the last few years we have suffered some major storms and the coastline has taken a battering. Extreme storminess and loss of material during the 2013/14 winter months meant the need for material was particularly high this year and HOP’s plan was to test our shingle and then, if it was found to be suitable, develop a plan that would allow us to use it to shore up the coastline. A win-win scenario that would not only reduce our green impact but also that of Shoreham port who would normally have to ship the material in from other sites.

The shingle was put through rigorous testing, both in terms of constituent and grading, and a specialist environmental consultant was engaged to develop a Material Management Plan and conduct further testing. Unsurprisingly, the shingle was identified as the perfect material to restore the very beaches it came from and a plan of action was agreed with Shoreham Port further along the coast. Shoreham Port said ‘This is a fine example of joined-up thinking for the benefit of all. Nature doesn’t recognise man-made boundaries and this operation shows that working together on our coast protection can provide ideal solutions.’

We are now reaching the end of the process and over the course of the last month we have been able to deposit all the shingle to strengthen coastal defences. Now the public will be able to get back on the beach, however it will be some time before the excavated material resurfaces again at the Brighton i360 beach.