A delegation from the Brighton i360 recently visited the workshop in Holland where the cans which will make up the 162 metre tower are being made.

Led by the i360’s chief executive Eleanor Harris and architects David Marks and Julia Barfield, the party spent a day at the specialist Hollandia factory in Rotterdam. 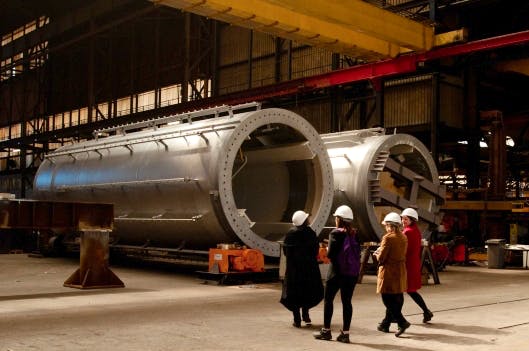 There they were shown the 17 pieces of rolled steel, or cans, which are due to arrive in Brighton by sea on June 11.

Each can measures between six and 12 metres in height and together will form the shaft of the i360. They differ in size, with the taller cans going at the top of the tower and shorter cans, but with thicker walls, making up the lower sections.

John Roberts, the chief engineer at the i360, also made the trip – which was funded by the board and Marks Barfield, the architects behind the scheme.  He inspected each can individually and was delighted with the progress.

The cans will soon depart for British shores and should land in Brighton on June 11, when a 100 metre high crane will unload them from the boats onto the beach. 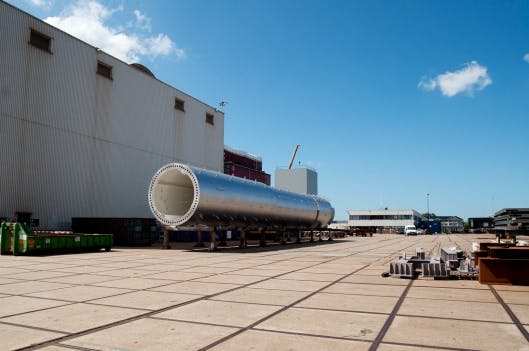 From there they will be fitted into place by a jacking tower. Rather than add each can to the top of the structure, the jacking tower allows the engineering team to build from the bottom up. Once the cans have arrived, the tower should take shape relatively quickly and the shaft should be completed by the end of September.

Eleanor Harris said: “This was the first time some of us had been to Hollandia and to see the cans up close was brilliant.

“Once they arrive in Brighton and start going up it will really give people a sense of the scale of the Brighton i360.” 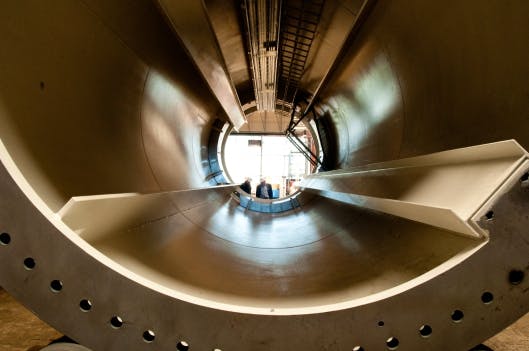 David Marks and Julia Barfield were also behind the London Eye and remembered the excitement which greeted the structure being floated down the Thames.

And Eleanor Harris is anticipating a similar response to the arrival of the cans on Brighton seafront.

“We are expecting there to be a lot of interest when the cans arrive by sea,” she said.

“Building the i360 a major feat of engineering. It really will be quite exciting to see the cans arrive and the tower start to take shape.”

For regular updates on the i360 construction and for further information about the beach landings event, follow @TheBrightoni360 on Twitter.