On Sunday 23rd August 2015, the Brighton i360 tower reached its full height of 162m. After the first jacking on the 15th June, Dutch company, Hollandia who have been leading the construction of the tower, have worked tirelessly and completed the tower just under 10 weeks from when the tower construction first started.

Neal Mardon, project manager at the i360 said

“The construction of the tower has been very successful and very quick too. It’s gained a great deal of public and media attention which we feel very proud of. To complete this stage is a huge milestone and while there is still a long way to go, I am looking forward to working with Poma and Mackley on the next phases of construction.”

Nardo Hoogendijk, Managing Director of main contractor Hollandia Infra said:
“This is a project we really like.  It fits into our portfolio perfectly. This is because there is so much innovation in it, so many activities that have never been done before. Besides the technical side, this project is special because of the fantastic spirit of cooperation. Getting a project like this, based on good relationships is amazing. Now, after just one year of hard work by our team we have reached the highest point of the tower, just ten weeks after the beach landing. This is what me makes proud, proud of the people who did it.”

Building the i360 Tower

Excitement started building at the time of the beach landings on June 11th 2015. An excited crowd gathered throughout the day (some from as early as 4am) to watch a barge carrying six sections of the tower and three sections of the jacking frame arrive, on Brighton beach. Only a few days later, on June 15th 2015 the first jacking operation took place. The jacking tower is a temporary steel frame that allowed the construction team to build the i360 using a jack-up rather than the conventional build-up method. The first seven cans were lifted into place with a giant crane ‘T-Rex’, before being bolted together.

The 200 tonne yellow crane lifted the first four cans into place, then one by one, lifted cans 15, 16 and 17 into place where they were bolted down onto the can below. Up to 72 bolts are used at each joint or ‘flange’, spaced out evenly around the circumference (the bolts are up to 75mm in diameter). You can read more detail about the importance of flanges on our blog.
The remaining 10 cans were then inserted at the bottom of the tower, using the special jacking tower. While up and lifting, the jacking tower was also used to fit the exterior cladding to each section of the tower. The top can, can number 17, already had its 5mm thick skin of expanded aluminium curved panels fitted. Each of the remaining cans had their cladding added during the jacking process.

We reached a major milestone in early August 2015 when the i360 tower became the tallest structure in Sussex at 120 metres.

Eleanor Harris, CEO of Brighton i360 Ltd said, “This has been a flawless precision operation, which has gone without a hitch, and the engineering team have done a fantastic job. It has been fascinating to watch the construction take place on Brighton beach – especially when the tower has been ‘levitating’ during the jacking operation, attracting crowds on Brighton beach.” David Marks, Architect and Chairman of Brighton i360 said:
“This is a breathtaking feat of engineering and a major milestone achieved for the project. I am excited by both the dazzling slenderness of the tower and the amazing way it has been built – in record time. It is an outstanding achievement, and I hope it will inspire a new generation to pursue design and engineering.”

Julia Barfield, Architect and Director of Brighton i360 said:
“We started on this journey ten years ago. It is astonishing to see a project that has taken so long to get to this point has gone up in just ten weeks. All credit due to the engineers and the construction team.” 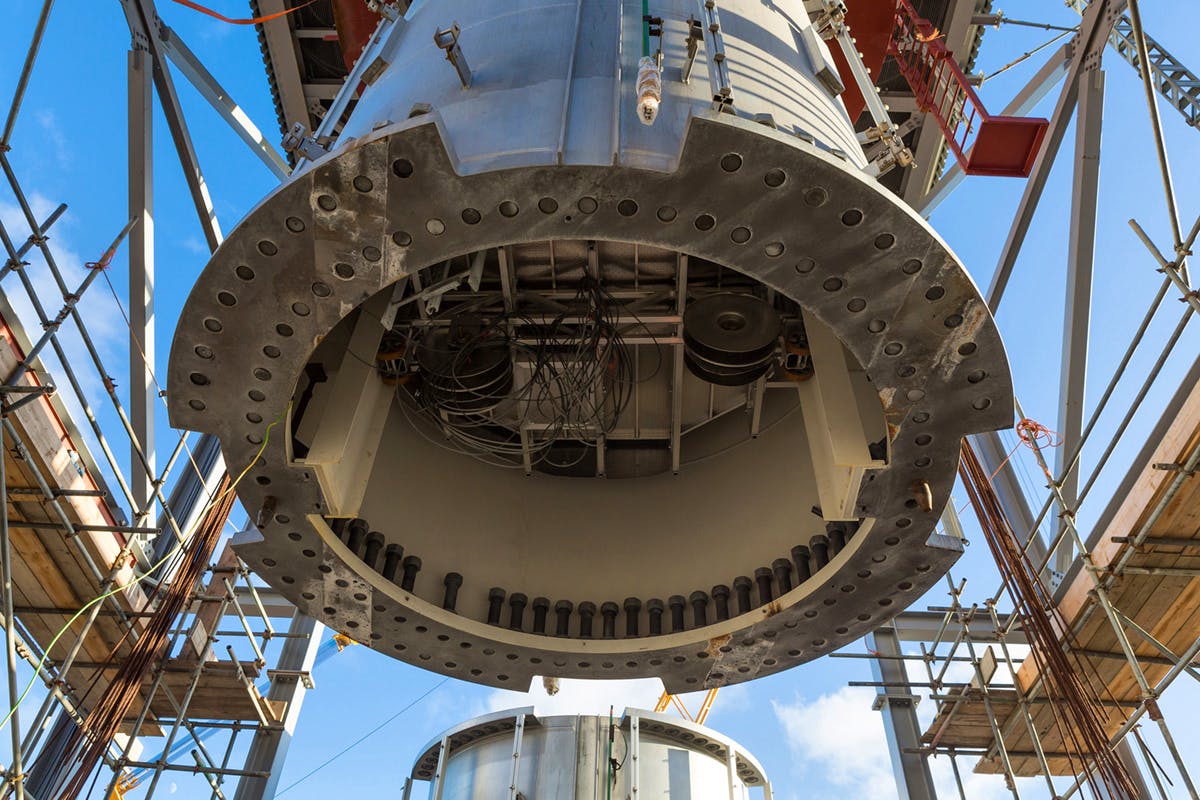 Said Dr John Roberts, Operational Director of Jacobs and Director of Brighton i360: “Jacobs’ primary focus on this project was to design a tower structure that could be erected safely. We are proud that this was accomplished ahead of programme, which is a great achievement and a testament to both the designers and the contractors working in partnership together.” Dick Russell is a director of Brighton i360 and has been involved with the project since its inception. He says “I am enormously impressed by Hollandia’s skill in fabricating this unique and very complex structure, landing the parts on the beach and assembling and erecting the tower on schedule; and all the more creditable given the very unseasonal Brighton weather with which they have had to contend over recent weeks”

Now the tower has reached it’s full height, we will start to dismantle the jacking tower and reclaim the beach; more details of that will follow. For now we are enjoying the amazing feat of engineering achieved.