When our architects, Marks Barfield, first met with the West Pier Trust in 2005 to discuss their ideas for British Airways i360, a proposed vertical pier on the landward end of the West Pier site, it immediately struck them that it would be wonderful to bring back to life the two grand tollbooths that originally graced the entrance to the historic West Pier.

The West Pier – how it all began

The West Pier in its heyday

During the 19th century there was enormous expansion of the railway network and tourists flocked to seaside resorts to “take in the sea air”.  Because of large tidal ranges it was often hard to get close to the water and so pleasure piers made of wood and iron were created, offering holidaymakers the chance to promenade over the water.

Eugenius Birch was commissioned by the West Pier Company in 1863 to “erect a handsome, commodious and substantial Iron Promenade Pier” that would showcase Brighton as a leading British resort and encourage new visitors. It was hugely successful and between 1918 and 1919, when visiting was at its peak, it entertained 2 million visitors. Birch’s innovative designs incorporated two identical, square ‘Italianate’ toll houses that were far grander than any other pier to date. It marked the West Pier out as both ambitious and innovative, particularly on matters of engineering and architecture. Initially admission to the pier was by payment of a toll of two pence (about £5 today), reduced to one penny on Sundays, but once the pier opened, the two booths instead became shops. For much of the pier’s history the eastern booth was used by a tobacconist and cigar merchant. It was later owned by Maynards and then became the Rock Shop, which many of you will remember.

The buildings became notable, integral and recognisable features of the West Pier and one factor in the Grade I listing of the pier as being of exceptional importance.

The decline of the West Pier

The popularity and state of the West Pier declined after World War 2. Fires and storm damage took their toll and in 2004 Heritage Lottery Funding withdrew support and plans to restore the pier were abandoned. The western tollbooth was dismantled in the 1970s and by the time Planning Permission and Listed Building Consent for British Airways i360 was granted in October 2006, only the eastern tollbooth (the Rock Shop), was still standing.

HOP, a local firm of engineers, assessed the tollbooth and found it to be in an advanced state of structural deterioration and in need of urgent attention.

By October 2012 it was agreed that it needed to be taken down due to safety concerns. 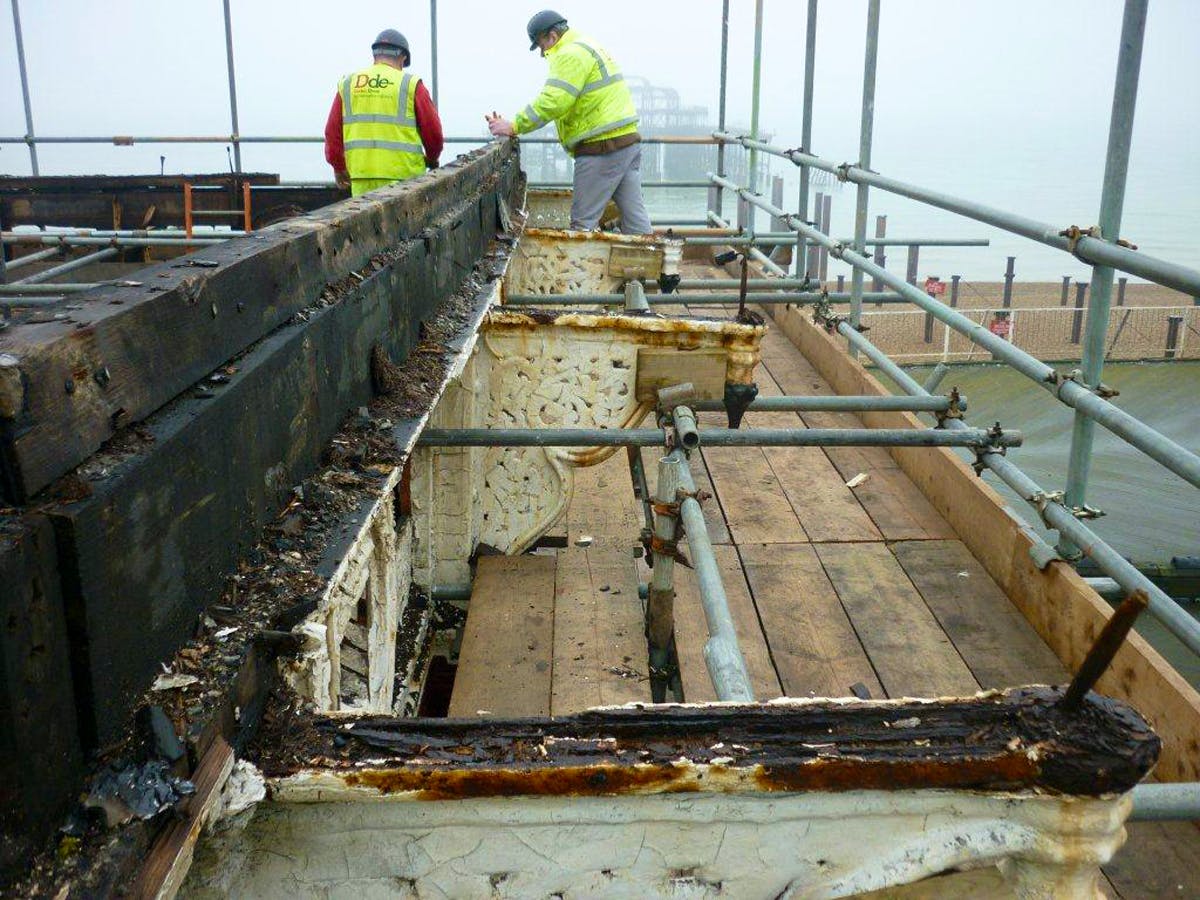 Each piece was numbered and recorded as it was dismantled – the aim being to salvage and reuse as much as possible. Each piece was then carefully stored until 2015 when the work began to breathe new life into the salvaged artefacts.

Marks Barfield Architects worked alongside Swan Foundry for the heritage project. Swan had been involved in a number of restoration projects of Victorian building and many other smaller iron-work projects along the Brighton seafront, including Madeira Terrace and the Shelter Hall plus other small refurbishment work replacing sea damage, but nothing on this scale before. It was an exciting challenge that would allow them to showcase some of the incredible traditional methods still used by their craftsmen.

The first thing Swan had to do was clean the pieces of 150 years’ worth of rust and paint. They did this through a method called ‘shot-blasting’. Each section went into a sealed unit and was blasted with shot peen – small metal fragments that effectively remove the exterior debris without damaging the iron.

Each piece was moved into a sealed container for blasting

Once completed, the team worked with Marks Barfield Architects to make extensive examinations of each piece to check for damage and to assess whether the material could be reused.

David Marks reported back: “Following extensive cleaning and examination of the salvaged material in 2015, it was discovered that none of the salvaged original structure was capable of being feasibly or viably restored.  However, the salvaged cast iron ornate mouldings  are being reused as original models from which to recreate new castings suitable for inclusion in the reconstructed tollbooths.

“The methodology for creating the new cast iron work utilises the same methods and skills used by the foundrymen that made the original 1866 versions, using hand planing and carpentry work as they would have done in the 1860s.  Approximately 24.5 tonnes of new cast iron based on 28 separate patterns and the original castings will embellish the tollbooths.”

Recreating the past through pattern-making

As the designs were based on original artefacts rather than drawings, the team had to ‘reverse engineer’ the 28 salvaged pieces first, measuring them accurately to create the pattern pieces. This is where it gets complicated – because each of the original pieces was so intricate, numerous sectional moulds known as ‘pattern equipment’ were needed for each one. These slotted together like a jigsaw to make a single mould for each piece. Once the iron was poured these moulds could then be removed piece by piece.

Making the moulds for an Acanthus head

Martin Phillips of Swan Group said: “Our team has had to look in depth at not only the design of the actual building, but at the techniques used by skilled craftsmen when they produced these iconic buildings 150 years ago. Working without detailed drawings, our pattern-making team has had to use the original castings for a lot of the dimensions, details and design.

“You can never fail to be impressed by the Victorian engineers’ ways of design and problem solving, nor by the skill of the craftsmen of the day.”

Phillips continued: “The whole team at Swan Foundry; pattern-makers, method engineers as well as moulders, core makers and fettlers, has taken great pride in working on such a high-profile project.”

Ian Crockford, Director of Marks Barfield Architects, said: “It has been fantastic to see traditional British craftsmanship and skills being used by modern-day foundrymen and pattern-makers as they would have done in the 1860s when the original tollbooths were built.

Roger Stacey – one of our traditional British craftsmen

“The pattern-maker has taken measurements from all the salvaged castings and produced new moulds capturing all the existing detail of the ornate Italianate mouldings. In order to make new castings the exact same size as the originals, the new moulds have to take into account that iron contracts during solidification and cooling.

“The new tollbooths that will grace the entrance to British Airways i360 will match the originals in materials, style, dimensions, design and appearance, ensuring that the architectural and historic importance of these buildings is preserved for posterity.”

With the pattern-making finished, the moulds were dispatched to Swan Foundry for the cast iron to be poured.

Alchemy as the molten iron is poured into the moulds

Overall, 24.5 tonnes of new cast iron is being poured into the pattern-makers’ moulds and the finished product will ensure that the exterior of our tollbooths match the originals in materials, style, dimensions, design and appearance, ensuring that the architectural and historic importance of these buildings is preserved and the beauty of Birch’s original designs are available for everyone to appreciate.

Although the cast iron is still at the foundry, work has begun on the timber frames. 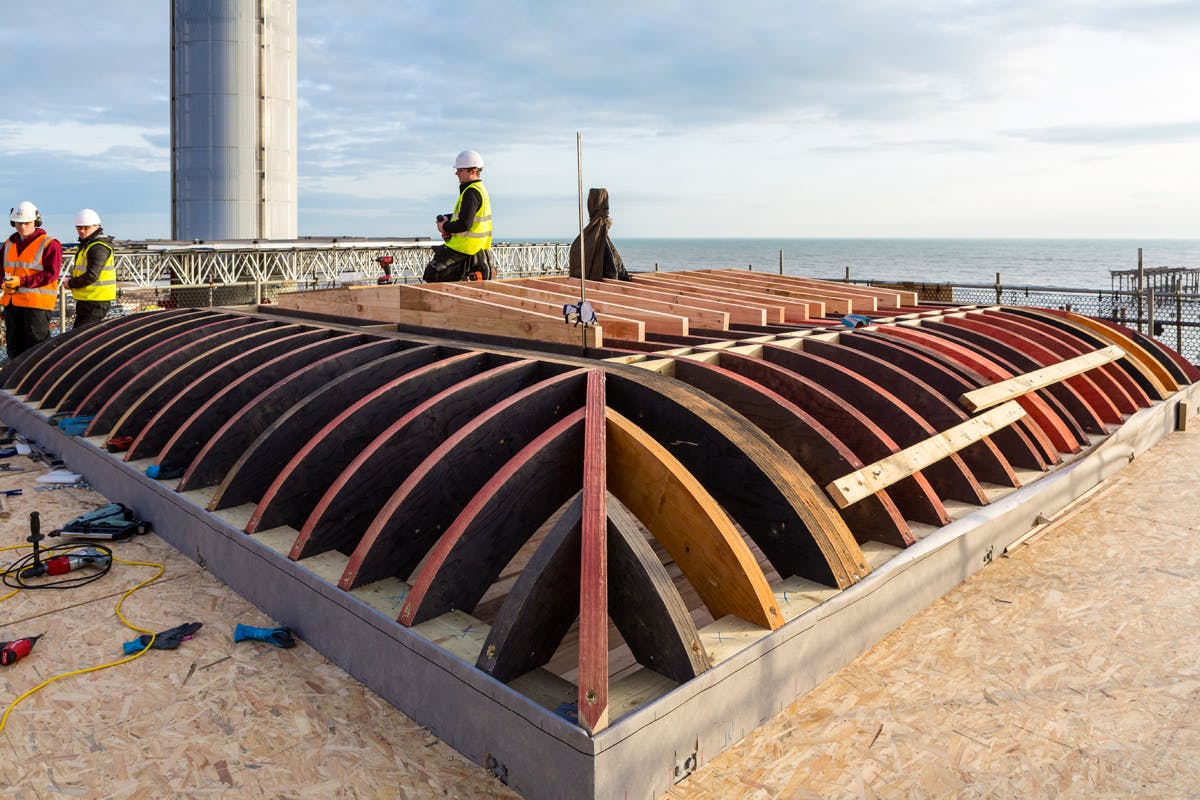 Working with Inwood Developments Ltd, an East Sussex company, the timber super-structures were assembled off-site in panels and then delivered to site and craned into position. The walls are finished with a beautiful curved roof ready to accept a traditional hand-fixed batten roll metal roofing, to match the original. Traditional methods were key to the build. Nigel Braden, Director of Inwood Developments, said: “The rebuilding of the historic tollbooths has been an interesting project for the company in that we are learning and using new skills.

“We did some primary research consulting and collecting historic photographs, some dating back to the 1880s, in order to achieve the correct appearance of the original buildings and to ensure the reconstruction was correct in the design detail.

“The rebuilt tollbooths will restore a touch of Victorian elegance from a bygone age and demonstrate the skilled craftsmanship that still exists in this country.”

A drawing of the toll booth

West Pier Trust Chief Executive Rachel Clark said: “The care and expertise that has gone into the lengthy process of recreating these important buildings is a great achievement.

“It is a tribute to Marks Barfield Architects, creators of the British Airways i360, that the two fine tollbooths will be enjoyed again by the public.”

A new role for the West Pier tollbooths

The tollbooths will go back into almost the same position they were originally, with a colour scheme taken from some of the early photographs, but they will play a very different role to the original booths.

The western toll booth will once again become the guardian to the entrance of the site, becoming the British Airways i360 ticket office and check-in area.

We want to celebrate the heritage of the site, so the eastern tollbooth will become a traditional tea room that can be accessed directly from Kings Road and will be open to the general public (as well as people paying to fly on British Airways i360).  Visitors can come and enjoy afternoon tea, coffee, cake or lunch while enjoying the lovely views of Brighton beach, the West Pier, Brighton Pier and out to sea.

The eastern tollbooth will also be available to hire for wedding ceremonies, private dinners and parties. Imagine an intimate ceremony in the tollbooth followed by a flight on British Airways i360 – a beautiful way to experience something old and something new on your special day.