To celebrate the 100th anniversary of our sponsor British Airways, we would like to take a moment to mark 100 years of the iconic airline. British Airways has come a long way from the world’s first scheduled air service, to it now flying 145,000 customers every day to more than 200 destinations in 75 countries across the globe.

In the decade that followed, many airline companies were set up and in 1924 four of the key airlines merged to create Imperial Airways.

It was 1935 when the world first heard the company name of British Overseas Airways Corporation.

With the introduction of jet-propelled planes, air travel was soon completely transformed and by 1957 the first non-stop flight from London across the Pacific Ocean was made.

The 1960s marked an era of big changes. Many flights operated with separate class cabins; the Boeing 707 increased the number of passengers a flight could carry and by 1969 staff were checking passengers onto flights with computers.

It was 1973 when the airline introduced the world to its first passenger Concorde, making it possible to cross the Atlantic in under three hours.

British Airways soon became the airline of choice for many business travellers with the introduction of a ‘business’ class that would sit between First Class and Economy.

Over the years developments have included club lounges, flatbeds and a Premium Economy option on their new fleet of Airbus and Boeing aircraft.

In 2019 British Airways proudly has a fleet of over 280 aircraft and an employee list of over 40,000. It continues to be at the forefront of technology, which is why, in November 2015, the airline signed a five-year deal to sponsor the i360 – which standing at 162 meters high, is one of the most innovative engineered visitor attractions in the world.  This partnership represents a shared vision for cutting edge engineering and design.

When our architects, Marks Barfield, decided to design the BAi360 viewing tower they worked closely with the West Pier Trust to ensure that the heritage and history of the promenade and its once exceptional seaside pier was at the heart of the tower. Although long closed and abandoned to the elements, miraculously it still survives as a symbolic feature of the Brighton seafront. Like British Airways, the West Pier has a rich heritage – dating back to 1866 when it first opened. 100 years ago marked the beginning of its heyday, that year it attracted over two million visitors, its largest ever annual footfall.

For over a century and a half the West Pier has been Britain’s most iconic pier. Renowned for its wonderful architectural style, it has been visited and enjoyed by millions. Even today with its sculptural remains casting an eerie beauty over the seafront, the West Pier is still the most photographed building in Brighton. Looking to the future, the West Pier Trust are planning to restore the original octagonal 1866 pier kiosk. This exquisite structure will be the oldest pier building in the world and the UK’s first seaside learning centre. To raise funds towards the project, the Trust is holding occasional fragment sales in the West Pier Centre.  Every purchase will come with a certificate of authenticity. 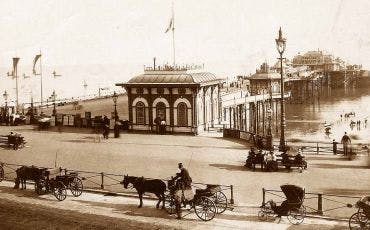 When Marks Barfield, met with The West Pier Trust back in 2005 to discuss their ideas for the a proposed vertical pier on the landward end of the West Pier

site, it immediately struck them that it would be wonderful to bring back to life the two grand tollbooths that originally graced the entrance to the historic West Pier. It is for this reason that our two identical Italianate-styled tollbooths to the east and west of the upper deck are faithful reconstructions of the original Victorian tollbooths. 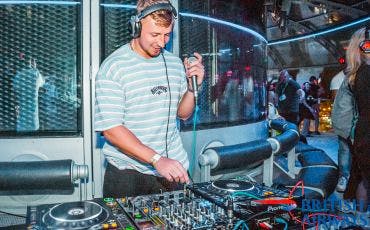 To celebrate the 100th anniversary of our sponsor, we have invited 100 Resident Members to enjoy a flight on Sunday 25th August at 10:00am on us. We are also offering complimentary Speedbird 100 beer (a special collaboration between Brewdog and BA to celebrate the century) to our visitors on board the pod throughout 25th August. This special edition beer is served on BA flights, subject to availability.  We will be celebrating the whole bank holiday with our ‘Sky Bar del Mar’ event, which will see DJ Mikey playing Ibiza Chillout tunes from 6-10pm on the pod. It will be the perfect way to spend a bank holiday, watching the sun set with a glass in hand.