Drawing A Unique Perspective on the Brighton i360

A Brighton-based artist is documenting the construction of the i360 in a unique way by turning the engineers and the structure itself into a series of cartoon drawings. 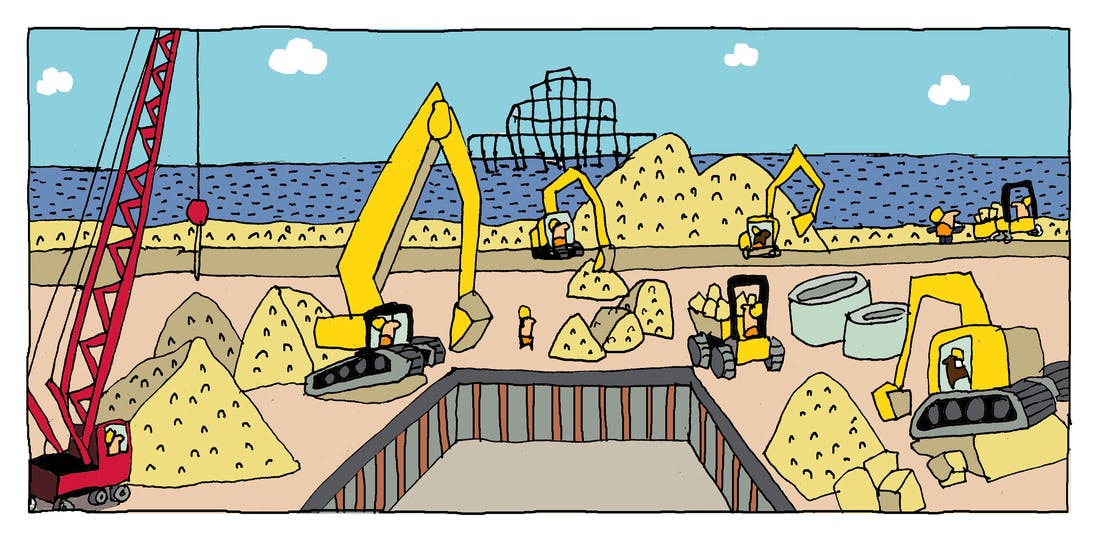 Lisa Holdcroft, who normally draws local houses or landmarks, decided early on that the seafront build was worth recording and has been uploading images to her website, www.lisaholdcroft.com, each time something significant happens on construction site.

Her first drawing showed the team digging the hole which would later house the tower’s 4,000 tonne concrete foundations and she has been a regular visitor to the site ever since.

“I decided I was going to draw the build, bought myself a bike and started cycling to and from work every day so I could follow what was happening.

“I have a sketchbook and do some rough drawings in it which I then expand on when I am at home.

“I scan these onto my computer and then add the colour. I have purposefully used a limited colour palate so the different pictures sit well together on my site. Once I am happy with them, I add them to the site, usually in batches.”

She has been pleasantly surprised by the levels of interest in her site and says it has spurred her on to keep the page updated. Each major milestone has been covered: the concrete pour; both barge arrivals from Holland; the steel cans being lifted onto site by T-Rex the giant yellow crane; the building of the jacking tower and each jacking lift.

…what Lisa is doing is completely unique. 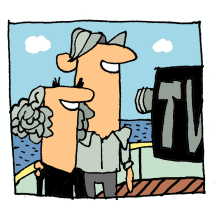 Recently the intrepid rope team often seen dangling from the top of the tower while they perform checks on the cladding have been turned into cartoon characters – as have the i360’s chief executive Eleanor Harris and architect team David Marks and Julia Barfield.

In fact, there is now a queue forming among the engineering team to decide who is given the Lisa Holdcroft treatment next. The smart money is on Neal Mardon, the project manager from Hollandia, or the crane driver. As Eleanor Harris explained, the website has created quite a buzz on site. She said:

“We all love Lisa’s work and look forward to seeing the next instalment each time something big happens on site.

“We have two local photographers who regularly come down and take photographs of the build and Latest TV is producing a series of short films for us – but what Lisa is doing is completely unique.”

Opening of the i360 is still around a year away, with the first flight scheduled for next summer. We are thrilled that the project has already inspired artists locally, such as our recent graffiti event.

So how long exactly does Lisa plan on keeping her project going?
“I have thought about it,” she said. “The plan is to keep drawing. It does take up a lot of time but I want to carry on until the i360 is up and running. That way I’ll have recorded the whole construction.

“The last drawing will probably be of the first ride. That will be a fitting last image.”