A much-loved piece of Brighton’s historic West Pier, a pair of toll booths designed by Eugenius Birch which originally stood at the entrance to the pier, is being restored ready for a return to the seafront by the Brighton i360 team.

One of the booths later became the well-known Rock Shop, which closed in 2009 after becoming structurally unsound. It was subsequently placed in storage after being carefully dismantled in 2012 with a plan for it to be restored and returned to the site as part of the i360 development. And with only 12 months until the anticipated opening of the seafront attraction – which will be the world’s tallest moving observation tower – the restoration work on the eastern toll booth has begun.

A team of experts from Swan Foundry are currently shot-blasting sections of the old ticket booth to strip it back to bare metal. The technique involves sections of the booth being put inside a shot blaster, where they are rotated while being bombarded by steel shots of various sizes for around five minutes. 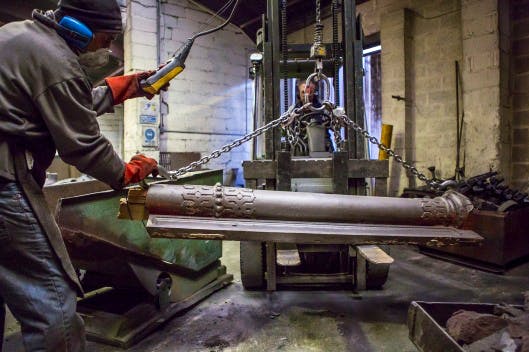 A replica of the western toll booth will also be added to the site.

Rachel Clark, the West Pier Trust’s chief executive, was among those pleased at the restoration and looking forward to the booths’ return to Brighton beach.

She said: “The West Pier Trust is delighted that a key element of the i360 scheme will be the reinstatement of the pier’s toll booths in their original positions.

“These iconic buildings adorned the entrance of the pier when it opened in 1866 and, expertly restored and replicated, will similarly greet the public when visiting the i360.

“We’re thrilled that for the first time in 30 years both of Eugenius Birch’s splendid buildings will be back where they belong and mark the entrance to Brighton’s newest and most exciting attraction.”

David Marks, the architect who designed the i360, said it was always the intention to embrace the area’s heritage at the same time as providing the city with a modern attraction.

He said: “Our vision for the Brighton i360 – a vertical pier – is to follow in the spirit of the original pier, inviting visitors to ‘walk on air’ and gain a new perspective of the city, just as they ‘walked on water’ in the past and viewed the city from the sea.

“I am delighted that we are able to reuse parts of the Victorian cast iron supporting structure and restore parts of the original pier to their former glory, setting the historic alongside the futuristic, to create an exciting new architectural and tourist destination.”

The i360 is also contributing annual funds to the West Pier Trust – an arrangement which will be invaluable for the charity to achieve its objectives which include promoting the pier’s history and keeping alive its memory.

Eleanor Harris, chief executive at the i360, was similarly excited by the returning two booths. She said: “These beautiful buildings will be publicly accessible and become our ticket office and heritage tea rooms; with a perfect vantage point to enjoy views of the West Pier ‘sea island’ – Sussex’s most photographed structure.”

The toll booths will be re-built on Brighton Seafront in spring 2016 at the same time as the Brighton i360 is completed.