We’re in! After months of preparing to break in to the Victorian sewer, the team stayed on-site all Thursday night to undertake the delicate task of opening up the brickwork pipe, completing the job in the early hours of Friday morning.

Every build has to prepare the ground for foundations, but not many have to deal with a Victorian sewer system that still functions as the main sewer in Brighton and Hove. 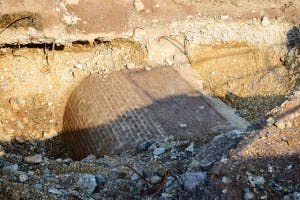 The Victorian sewer runs right through the i360 site

The sewer pipe has to be 5.5m away from the perimeter of our beach building, so over the last few months our contractors – Mackley and Thornes – have built 120m of concrete tunnel, as well as four manholes – one at each junction. Junctions One and Two are where our new pipe connects to the Victorian sewer and for months the two pipes have sat next to each other as we discuss the best possible method to connect them. 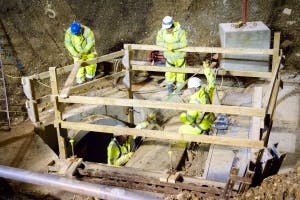 The tricky task of joining the old and new sewer

When you are diverting a main sewer, environmental and community impact must be taken into account; the type of sewer and water flow must be considered and in our case, an intricate understanding of the integrity of Victorian brickwork is needed. Mackley and Thornes, our contractors, had to look at where we would break in and how we would manage the sewage flow whilst we connected the old and new pipes.

Many different methods were brought to the table, each using a potentially smelly process that involved pumping out the sewage from the manhole outside the West Pier Arches shops. We then had a stroke of genius… what if we dispensed with the generator and did not pump the sewage at all?

By using a clever piece of kit that looks like an inflatable doughnut, the plan was to literally bung up the sewer and, instead of pumping the flow via an external pipe, direct the flow into our newly built diversion pipe. Because it is inflatable, we could then build up around the bung and, once complete, enter the manhole and pull the plug on the inflatable. The new plan was faster, more environmentally aware, put less pressure on the sewer system and meant we could do all the work within the confines of the i360 site – what’s not to like about that?!

The next step was to put the plan in action.

The brickwork sewer pipe was the first big problem – it is clever in design, shaped like an egg rather than a circle as this is a stronger shape. It is incredibly difficult to take apart – if you are too ‘gung-ho’, smashing a great section, the bricks could cave in. Instead the team had to anchor bolt the top section and cut away the bricks in small sections. In some places the bricks were five deep, so this took some time.

Cutting into the sewer

Once a section had been completely freed, it was lifted by crane. This gave the team the first look into the Victorian sewer – sealed up since 1869. Southern Water were here for the momentous manoeuvre. They are keen to take the sections of wall for display; the old sandstone bricks are still in remarkably good condition. Precision work as we lifted the sewer wall away

Of course as we sorted out manhole one, work was well underway on manhole two. We can’t divert the flow in and not out again. The bungs were put in place and quickly inflated to the right pressure. The tubes that run through the centre were attached to solid pipes that fed into and out of corresponding bungs in our new system. Et voila!

The diversion pipe is put in place

But would it all work? The flow is low in the middle of the night, but all eyes were on manholes three and four within our site. We should at least see some water pass through the pipe…

It started with a trickle, but as the night progressed, the waters flowed. The waters flow through the sewer diversion

It was in the early hours of the morning that the team raised a cheer. Brighton… you have been diverted!

Walking around the site on Friday morning, we had a look down the various manholes (not that smelly) and talked about the process with Stuart, a Southern Water Delivery Engineer, ‘Hats off to them, it was an incredible bit of engineering’. His colleague was quick to point out ‘virtual hats’ of course – we are on a building site after all.

Now that we have the diversion in place, the redundant section beneath our building will be excavated and removed ready for our foundations. Anything that falls outside of our building will be filled in with concrete.  If you are interested in the Victorian sewer, head down to the site as you may well see parts of it this week.