Many of you will have seen David Marks, the architect behind the i360, on BBC South East recently. David travelled with the BBC television crew to the Hollandia factory in Rotterdam for a first-hand look at the 17 tower cans due to arrive on Brighton beach this June. We thought the news piece had a real impact. Having worked on a muddy site for many months, it was a real thrill to see the shiny steel cans in the factory and know that in less than three months they will be here. For those of you that missed the show, here are some more photos from the trip: 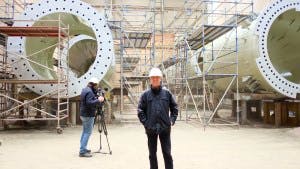 David and the crew were shown around the factory by Wim van’t Hof, Senior Project Manager and Works Director at Hollandia. The cans behind him have had their flanges attached, bolt holes drilled through and are currently being painted with a protective coating to withstand the elements. 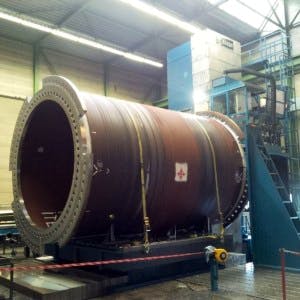 The bolt holes have been drilled using CNC boring machines (above). The can above looks a rusty colour because it has not yet gone through the cleaning and painting process. 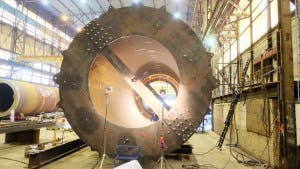 In most of the images the cans are hollow, but we spied a bar running across this one above. David reports that this is a temporary jig for centring the can to enable accurate setting out for the various cleats which will be welded inside the can to support ladders, platforms, counterweight guiderails, dampers, cable trays and everything else that needs to be supported inside. Everything needs to be welded into place in Rotterdam, while the cans are in a factory-controlled environment. While David was there, the team were busy working on the counterweight guiderails which will be fixed inside the cans and will guide the counterweight up and down. They also had the stainless steel abseil rail that will be fitted on top of the upper-most can at the top of the tower. 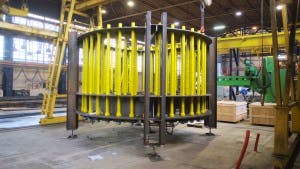 A lot of people are curious about how we will fit the first can into the ground and while they were at the factory, it became clear. We will use an anchor bolt frame (above) that is pre-assembled in Holland. It will be cast into the main foundation ready for us to bolt the first tower can down. Although the pod is being built in France, some elements of  the mechanism need to be fitted into the tower cans before they arrive in Brighton. The bull wheels and counterweight guide-wheels (above) were shipped from Poma, our French team, to arrive in Rotterdam recently. David and the BBC crew really got a sense of the scale of the tower, something that Brightonians will probably only begin to appreciate when the boats arrive in June. It was a fantastic trip and we hope the photos have got you as excited as we are about the tower build.