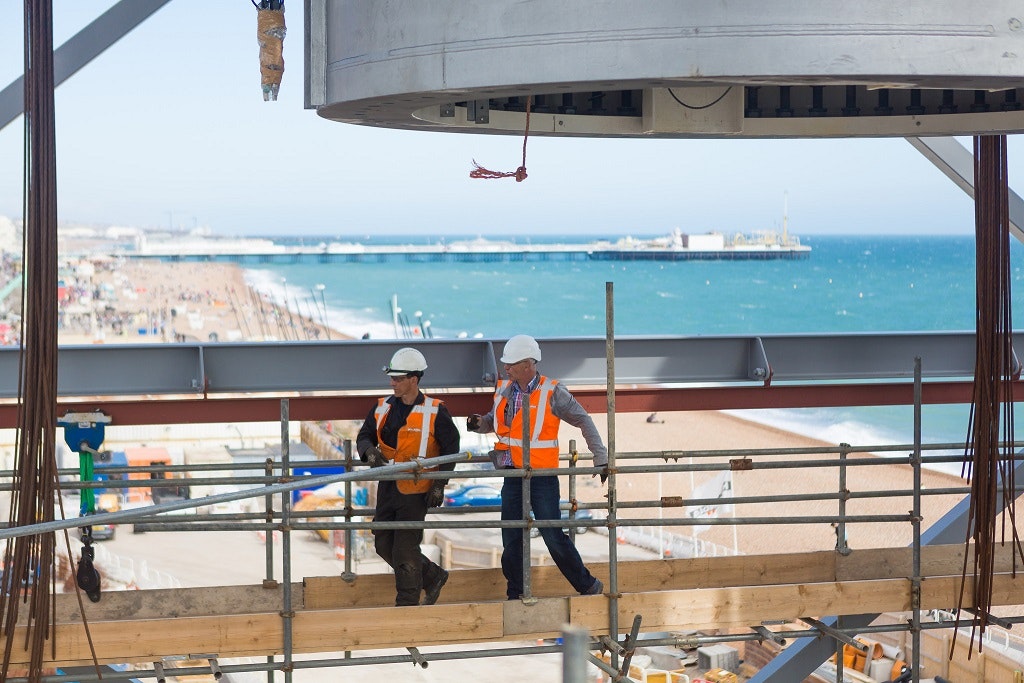 The second of the i360’s planned nine jacking lifts took place this week taking the tower to 82 metres in height – and one of i360’s photographers was on hand to capture the inner workings of the jacking tower.

The latest lift makes the attraction already the second tallest building in Brighton and Hove, with only the 102-metre nearby Sussex Heights higher.

Those cans will be inserted during seven jacking sessions – with some of the smaller cans planned to be fitted together prior to jacking.

Kevin Meredith, one of two local photographers documenting the construction project, was on site and given a tour inside the jacking tower. A selection of the images he took appear in this article – including some of the workings of the jacking tower.

Those workings include a cable jacking systems which is attached to a 16 tonne steel collar which fits over the cans and is used to lift the cans up in order for the next can to be placed underneath. 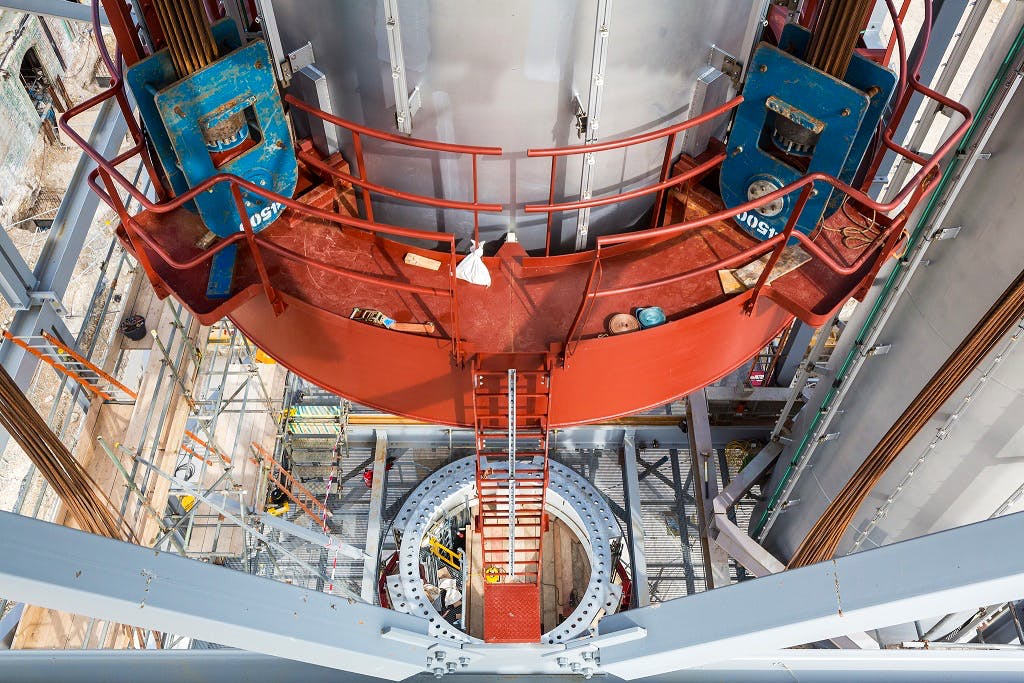 During each jacking session, the steel collar is lowered within the jacking tower and attached to a can. Four strand jacks, each with a lifting capacity of 450 tonnes, then gradually jack up the cans stacked above, high enough so a new section of tower can be slid underneath.

The first jacking session saw the tower lift 315 tonnes and the final lift will be almost 1,000 tonnes.

The next lift is provisionally pencilled in for either Monday or Tuesday of next week, with updates available on the i360’s Facebook page or on Twitter by following @TheBrightoni360.

Neal Mardon, the project manager from Hollandia, said: “It has been great to see the jacking tower operating and everything has been going according to plan.”

Interest in the jacking process shows no signs of dropping off and the i360’s webcam has had 43,000 views in the last 30 days. It broadcasts with a two-hour time delay and can be viewed online HERE.

Each jacking session takes a few hours – for example Wednesday’s started in the morning and continued into the afternoon – and the engineering team is also cladding each section of tower prior to it being jacked and appearing out of the top of the jacking tower.

The jacking tower is broken up into different levels – with the cladding room the level nearest the roof. Inside there a team from James and Taylor, the specialist cladding firm, is meticulously adding perforated panels to the side of each tower can. The cladding is an important part of the tower and more than 320 panels of cladding will be added in this room over the next couple of months.

David Marks, the i360’s architect, previously described the jacking tower as “a vertical factory” adding: “Individual steel cans go in at the bottom, and the finished tower comes out of the top, with the steel cans safely bolted together and clad in an eye-catching, diaphanous, aluminium veil.” A further selection of Kevin’s photographs are published below: