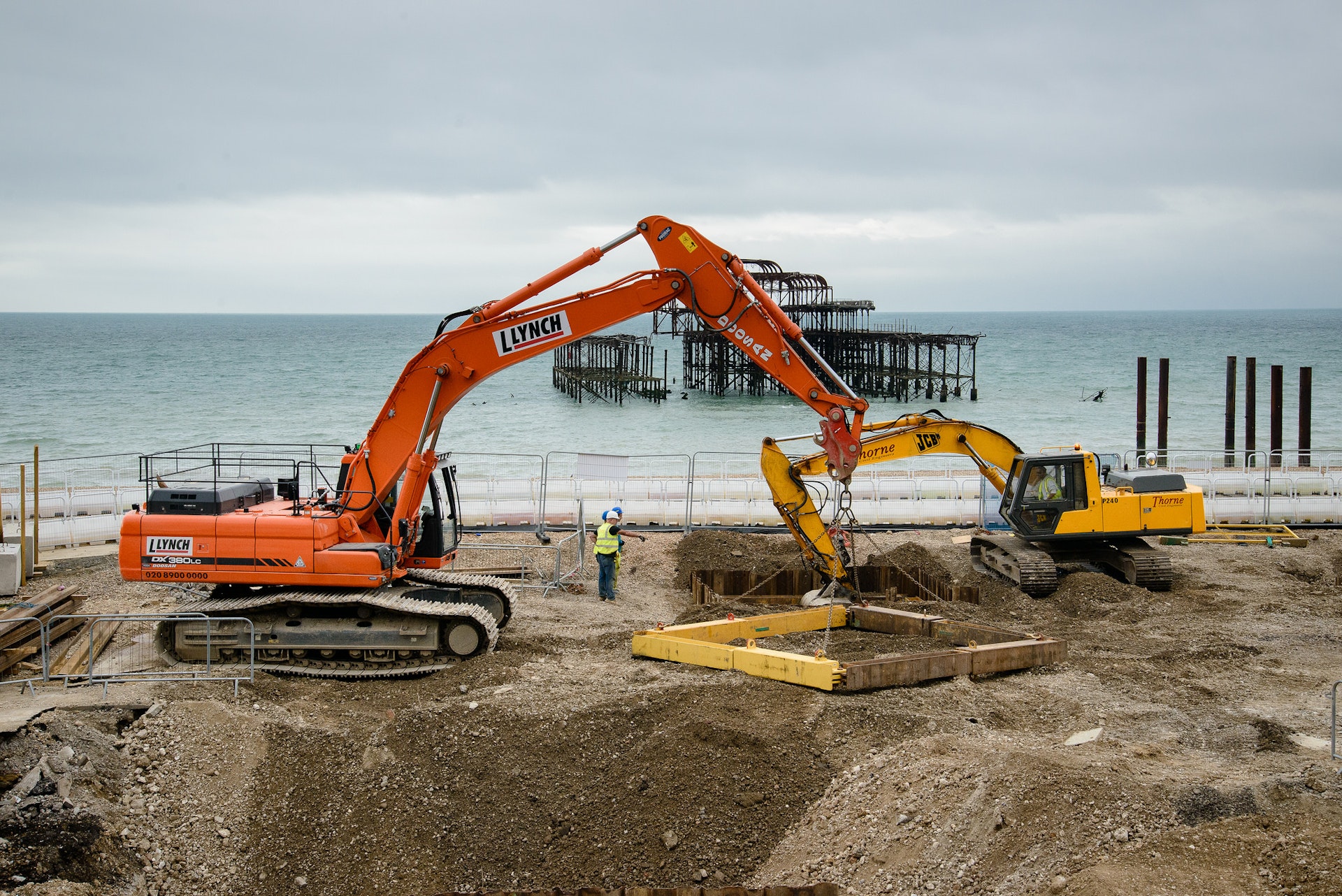 Managing the media and mud

We get a lot of media attention at the Brighton i360 and it’s great to take people out onto the site.

There is masses to see and the construction site provides the perfect background for discussions on our build. It’s also a great way to bring the project to life – we can literally take journalists to the base of the tower or point out exactly where our brasserie and event space will be. Of course, they need to be prepared to trudge through the mud – there is nothing glamorous about the i360 site… yet.

This week we had both Latest TV and BBC Sussex Radio visit. We are reaching a pivotal point of the project, with the end of the cable jointing and the imminent link-up of the old and new sewer. This was the last chance to get close to the underground works before they are buried back beneath our site. Eleanor Harris, our chief executive, spoke to reporter Paul Sawtell from BBC Sussex radio, while Dan Argles, Mackley’s site manager, and Nigel Hosker, our project engineer, spoke to Ceirney Eddie from Latest TV.

The first port of call was the electrical cable trench.  This has been a tough project for the team; we had no clear map of where the nine major power cables were and once we started excavating, we in fact found 12.  The old power lines needed to be removed using archaeological dig methodology, a combination of suction excavation (a giant hoover) and hand digging, to carefully extricate them and run them through new, safe piping that can be easily accessed in the future. It was crucial we did not damage the cables as they power a third of Brighton and Hove.

As we walked closer to the last exposed section of cabling, we stopped to pick up some construction site noises for BBC Sussex. In radio, the sounds are crucial to set the scene and this was one of the reasons we had to pre-record the interview. At 7am, when BBC Sussex do their live reports, there is nothing happening on site.

When we arrived at the cables, Paul, the reporter, described in detail his surrounds. Eleanor was able to provide more background about what he could see, explaining that we replaced the old cables with brand new ones, the largest of which is 33,000 volts. If you imagine that one house uses 1,000 volts, you get a much better understanding of why the cables had to be handled so carefully.

Latest TV filmed Nigel as he expanded on the delicate work of changing the cables over. Cutting Brighton’s electricity supply was not an option and we had to joint them when they were live so that we could keep power flowing through the city. It takes specialist cable jointers to perform this very difficult work and it was great to hear that it has now been completed. In just a few days this section will be covered over and the only access will be for repairs. Brighton is now running on our new cables.

The next focal point was the sewer. The new concrete pipe is now largely underground, but at each junction point there will be a manhole that provides access for any future repair work. We are still working on these and so we were able to show BBC Sussex and Latest TV some exciting glimpses of the work below.

We started at Manhole One, where the new concrete tunnel almost meets the old red brick sewer. This is where the first joint will be. Latest TV were keen to capture the moment on film before they are united together forever and hidden beneath the ground. Dan, our site manager, was on hand to answer a key question: why does the new pipe look so much smaller than the old one? Dan confirmed that what we could see of the Victorian brickwork was not representative of the actual sewer pipe. The brickwork was reinforced because it used to sit below the boating lake. The old pipe is actually smaller than the new concrete tunnel, which makes more sense as it needs to cater to a much bigger city.

At Manhole Three, the next junction point (the numbers run one, three, four, two) we were able to look down into the chamber where we could see two new sections of pipe that, once joined, will round the corner of our site.

Eleanor explained more to BBC Sussex about the challenges we had digging the sewer trench between Manhole One and Three. Again, we had no real clue about what lay beneath the surface, having to rethink our plans when we stumbled across an old sea wall.

Most people know that Brighton has a series of groynes that run down the beach, north to south, into the sea. What was unusual about this one was that it ran east to west. We believe that it was built in 1896 when the Victorians first started to manage the beach. Nigel explained that without management, the shingle will drift down the coast and into the sea, leaving us with no beach at all.

By using groynes and regularly ‘topping up’ the shingle, we keep the beach the way we like it. At some point, the east to west groyne must have been lost beneath the drifting shingle and never replaced. The profile of the beach changes gradually over the years and BBC Sussex were interested to hear that our discovery of the groyne suggests that the Victorian beach-goer would have been sitting three metres lower than we are today.

A short stretch away is Manhole Four, which has already been completed. It looks like one of the biggest manhole covers ever made at four metres in diameter. Dan explained that the huge circle before us was actually a pre-cast concrete cover slab (or ‘biscuit’, as they are known in the trade). The biscuit creates the roof of the chamber and although we couldn’t see them yet, a smaller manhole will fit into the top to provide access to the chamber below.

The weather was starting to turn so Latest TV headed to the beach to film a quick interview with Nigel Hosker about the removal of the final parts of the West Pier, while BBC Sussex recorded the last of the sound bites as the diggers started up again and moved back onto the site to continue with the works. It was a fascinating insight into the current works and great to meet Paul and Cierney.

Eleanor’s interview with BBC Sussex went out this morning. You can hear the radio piece here.