2014 was all about moving from concept to reality for the i360 as we reached financial close and began digging down. 2015, in contrast, is about moving up – our tower build begins this year and we can’t wait to finally see the i360 emerge on the Brighton and Hove seafront. 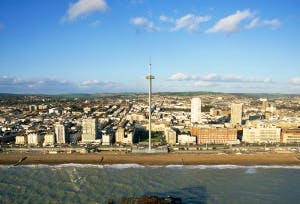 Our tower emerging from the seafront

With all this talk of tall buildings, we felt it was time to look at observation towers in a bit more detail. Why do they remain some of the most popular attractions in the world? What is it about them that appeals to visitors? Why are we building one in Brighton and how will we stack up against other tall towers? Like skyscrapers, they continue to challenge the boundaries of engineering, seeming to defy gravity, so is it more than just height that is important? So many questions! Too many, in fact, to answer in one blog; this week we will narrow it down, focusing on the universal fascination with the ‘view from the top’ and why tall towers need to be more than just tall.

Head and shoulders above the rest – why we love tall towers

David Marks put this simply: “There is a universal desire for people to get up high to enjoy a great view.” 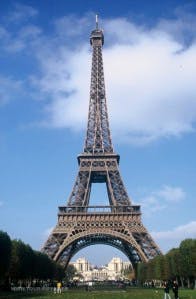 Controversial design for a historic city

A fascination with climbing to the top of something to see the view goes back to the beginning of time. It gives you a sense of place, spreading the immediate world below you and giving you a drastically different perspective.

Of course views could only be found at the top of mountains before man-made structures came along. Centuries ago, German aristocrats constructed them as a symbol of their wealth; TV and radio companies had to build them to transmit; lookouts were crucial for everything from war to forest-fire watches and so forth. Tall buildings became more commonplace. It wasn’t until 1889 though, when the Eiffel Tower was unveiled, that tall buildings became more than just a great view or a way to transmit.

The Eiffel Tower was created as the entrance arch to the World Fair and it had a bold and highly controversial design that Parisians hated but the rest of the world were entranced by. Visitors flocked to visit the tower and it became something of a symbol of the city. Nowadays it is still one of the most-visited attractions in Paris and receives almost seven million people a year, making it the most visited paid-for monument in the world. The unhappy Parisians were soon won round and now it is a much-loved icon of the whole country, going to show that even the most controversial designs can become part of the city they inhabit. The Eiffel Tower did not turn into a global icon just because it was tall. It had visual presence and people recognised it – even it’s silhouette shape. The race was on to do the same in other cities; new, architecturally-challenging, observation towers popped up all over the world. In fact they continue to do so – as we build higher, the view gets better and more people visit.

Of course it is not just about visitors. Growing cities need a way to identify and separate themselves. For a long time Brighton has traded on imagery of the Royal Pavilion and the two piers, particularly the West Pier – so what will we do when it finally crumbles away?  As our city rapidly grows and becomes a bigger industry player, we need something to represent our regeneration and forward-thinking attitude. We are not just a seaside town that’s nice for tourists to wander around, we are on the cusp of becoming an international destination that can attract a much wider market. We would love the futuristic i360 to become an icon for Brighton as we really believe it is at the forefront of all the exciting regeneration plans based around the seafront.

You can’t just build a tall tower and become an icon. People need to learn about you and understand where you fit on the landscape. Many of the most iconic tall buildings have achieved their status through film and television – popping up to denote a location or to provide a huge panoramic backdrop. King Kong holds on to the Empire State Building

Sleepless in Seattle had a pivotal scene on the Empire State Building when Meg Ryan and Tom Hank’s characters finally meet; Wimbledon stars Lizzie (Kirsten Dunst) and Peter (Paul Bettany) go on a ‘flight’ on the London Eye (presumably on a different night to the one in which Harry Potter (Daniel Radcliffe) flew past it on a broomstick!); Austin Powers (Mike Myers) used the Seattle Space Needle as his base of operations, making the most of Seattle’s coffee history to tie in with the film’s plot line; Bond (Roger Moore) jumped from the Eiffel Tower in A View to a Kill…the list goes on.

So how will we stack up against the world’s tallest towers? The Burj Khalifa dominates the skyline

We weren’t trying to compete in height with the likes of the Burj Khalifa in Dubai, which at 829.8 m high is 5 times the size of the i360, instead Marks Barfield wanted to provide an observation tower that used innovative engineering to offer visitors the chance to experience a changing view, something they felt was the key factor in the London Eye’s success.

As you glide up to the top of the i360 the view will unfold before your eyes. It is also something of an engineering marvel – how can we travel to such heights on such a slender tower? You can read more about this on a previous blog: The Science Behind the Tower.

Seeing the landscape from a new perspective is close to the heart of Brighton; Fred Gray’s book about the West Pier, Walking on Water, talks about how the West Pier provided visitors with a whole new way of viewing the city. Now that the pier is slowly falling into the sea, it seems fitting that a vertical pier is being built that offers a new take on the observational experience.

So height doesn’t really matter then? 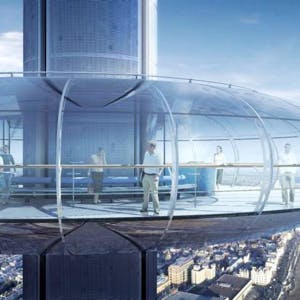 Height matters with any observation tower – the higher you are, the further you can see. Of course this must be balanced out against the weather patterns of the destination – you don’t want to end up in the clouds with zero visibility. In Brighton, the curvature of the earth means that from the i360 you will be able to see just over 26 miles…the distance of a marathon. This is the perfect height to experience the beautiful Sussex coastline – a UNESCO heritage Biosphere.

So where do we sit in relation to the other viewing towers in the UK? Watch this space – that’s a topic for another week.