The 10 best sea view bars in the UK

As we reach the height of summer, here are some suggestions for the top places in the UK to enjoy a drink overlooking the sea. 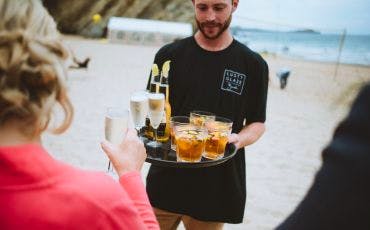 Lusty Glaze was crowned Britain’s Best Beach by The Sunday Times and this gorgeous bar and restaurant with rooms is a favourite for lazy afternoon drinks and seasonable suppers. Situated in a private secluded cove on the outskirts of Newquay, the beach is famed for its towering cliffs, white sand, reliable surf and panoramic sunsets. It has bucketloads of Cornish charm and the bar regularly hosts gigs by local and international musicians. 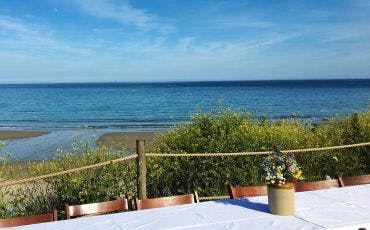 Tucked away on the remote coastal path near Portscatho on the Roseland Peninsula, the clue is in the name when it comes to the Hidden Hut. But you’ll be glad you have found it when you do: the views are spectacular and the food as fresh as it comes. You can bring your own booze, but most importantly, your appetite – this is a really special spot to while away a summer afternoon and evening. 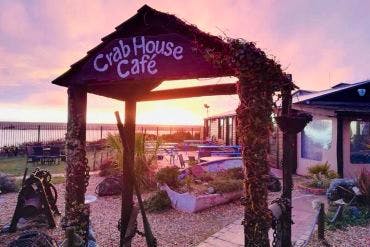 Situated overlooking the Portland coast at the western end of Chesil beach, a visit to the Crab House Café is the perfect way to quench your thirst and satisfy your appetite after an invigorating walk along the Jurassic coast. Guests can enjoy a drink overlooking the breathaking views, while tucking into locally sourced dishes, including Oysters served within minutes of them being picked from the restaurant’s own Oyster beds. This relaxed, unpretentious, ‘lack of frills’ restaurant, really is a hidden pearl of the South West. 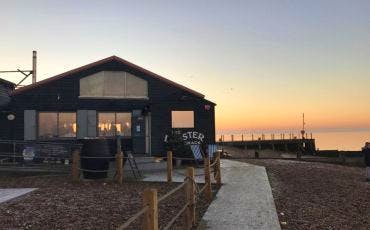 With fabulous views over the Thames Estuary, the Lobster Shack in the pretty seaside town of Whitstable is a gem. They brew their own beer and farm their own oysters, and the rest of the produce is kept fresh and local, supplied by the same fishermen they have used for 20 years. Pair a Whitstable Brewery Oyster Stout with a seafood platter for seaside perfection. 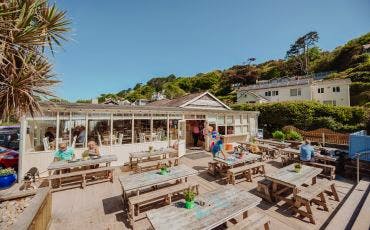 Like salt and vinegar carried on a stiff sea breeze, a pint of prawns or just a good white wine, the scent of the coast is a beguiling thing indeed. And at the Winking Prawn in Salcombe, you can enjoy them all at once. This charming café-bar is just over the road from North Sands, so you can come straight from the beach to a table out on the deck, or inside if the British weather is misbehaving. 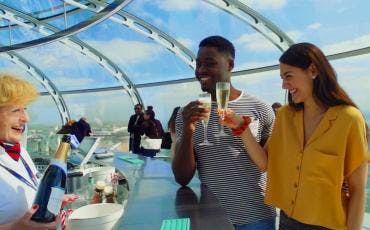 As seaview bars go, it doesn’t get much better, nor more sophisticated, than the Nyetimber Sky Bar, housed in a giant glass viewing pod 450ft above Brighton. As the BA i360 pod glides up slowly, the view unfolds revealing 60 km of coastline from Beachy Head to the Isle of Wight. Order a glass of sparkling wine at the bar, stroll around and you’ll feel on top of the world. Look out for autumn and winter Sky Dining evenings, when the pod is transformed into a restaurant among the stars. 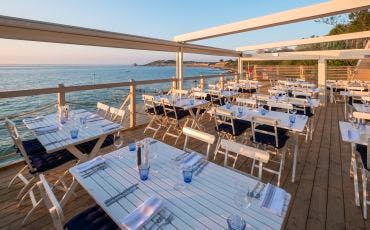 Unpretentious yet simply gorgeous, The Hut is the place on the Isle of Wight to enjoy a cocktail at sundown – or indeed earlier if you fancy. Popular with a mixed crowd of yachties, foodies and families, it sits between the jolly and colourful beach huts at Colwell Bay. Small boats can anchor off the front deck, otherwise they’ll send a tender to pick you up from the yacht. Or just arrive on foot – probably quicker but not so much fun. 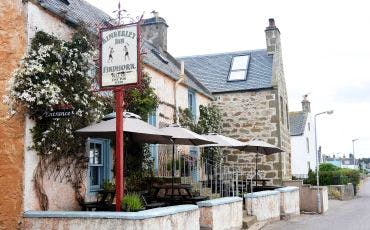 There is no finer place to be on a summer day in the north of Scotland. After a bracing walk around the bay of Findhorn the sunset is especially pleasing from the Kimberley Inn over a pint or two, although a bowl of the pub’s renowned seafood chowder makes it even more so. The view opens up to expansive views of the North Sea, but on the Findhorn side there is a delightful sandy beach framed by sand dunes. 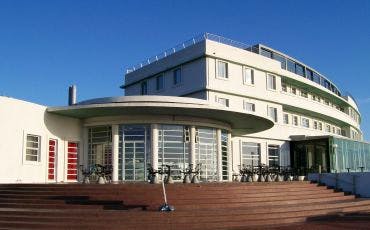 The graceful sweep of Morcambe Bay is best appreciated from the equally beguiling Midland Hotel. Saved from ruin at the turn of the millennium and restored to its former glory, cocktails are flowing once again at this art deco gem. The Rotunda Bar pays homage to the English modernist, Eric Ravilious, whose original 1930s murals were lost as the plaster hadn’t dried properly when he painted them. It’s good to know building blunders aren’t just a modern phenomenon…

10) Beach Bar at The Montague on the Gardens, London 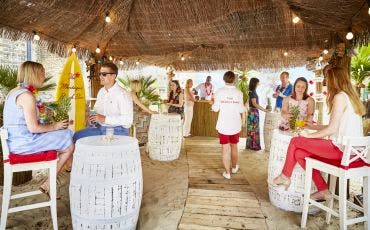 Not quite the seaside, but a darn good stab at it – the pop-up Beach Bar is back on the wood deck of the Montague on the Gardens, near the British Museum, for a summer season of cocktails and fun. Guests can chill out on real sand under a thatched roof, watch the palm trees sway in the breeze and post a picture or two from the photobooth. Who said London life is stressful?! Don’t forget the hashtag – #SurfMontague.