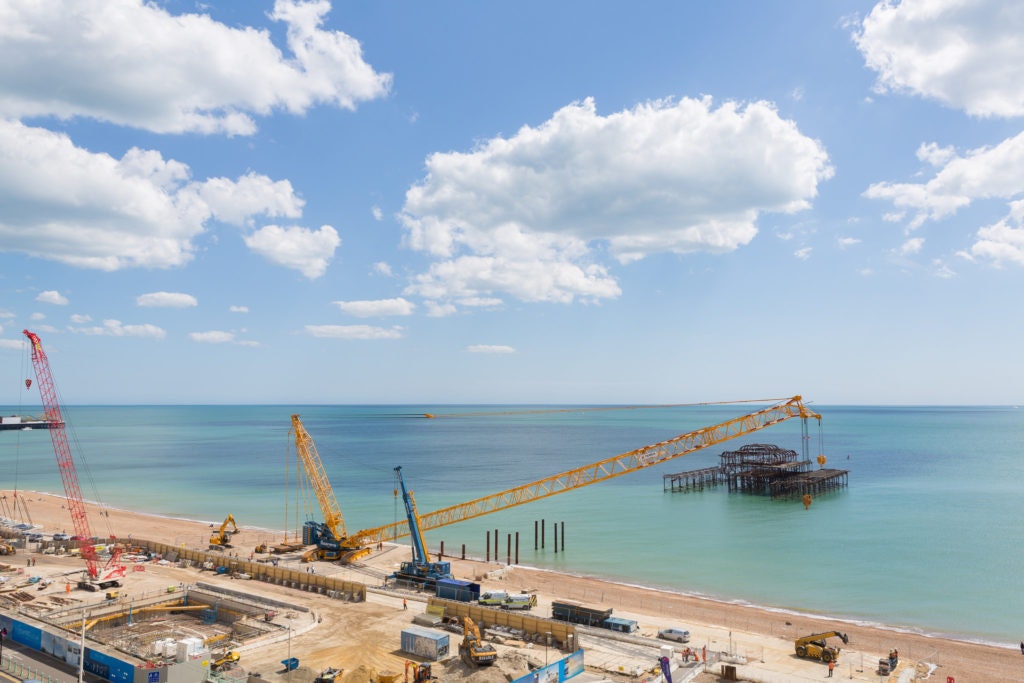 The cans are coming

Tomorrow (Thursday, June 11) is the day we have all been waiting for – the arrival of the first batch of steel cans which will make up the tower section of the i360.

The cans, which arrived in nearby Shoreham from our specialist factory in Holland earlier this week, depart their moorings along the coast at 3.30am and will dock in the water alongside the remains of the West Pier at around 5am.

Sunrise tomorrow is scheduled for 4.47am, meaning anyone who wants to come along to the beach and see the cans arrive should be able to see the barge from around that time.

Once in position off the coast, the construction team will begin readying the cans for unloading onto the beach. The first unloading should take place between 6am and 7am but because the crane cannot lift in high winds and there are strong winds forecast overnight, the unloading may be delayed by a couple of hours until they die down.

The giant yellow crane which has recently been erected on the seafront directly in front of the i360 site will be used to transfer the cans from the barge onto the beach. Tomorrow the first six cans will be moved, with 17 in total eventually forming the tower.

And it isn’t just the cans arriving tomorrow. The barge is also delivering the counterweight, which will be used to help the pod move up and down once complete, as well as four sections of a jacking tower.

The jacking tower is a specialist piece of construction equipment which allows our team to build the tower by placing each can will in the jacking tower, lifting it up, and then fixing it to the next section. This allows the construction team to build the i360 without the necessity of having a 200 metre plus high crane on site, and is a major piece of engineering expertise.

Our giant yellow crane has already been attracting significant interest from passers-by.  It stands 100 metres tall and weighs 6,000 tonnes. It also boasts a superlift add-on which boosts the load it is able to carry from 85 tonnes to 91 tonnes.

Once unloaded from the barge, the cans will be stored on the beach before being moved into place on the site when required.

The unloading process is expected to last throughout the day and into Friday and possibly Saturday, meaning there should be plenty for people to see on the beach even if they don’t fancy setting their alarm for 5am. 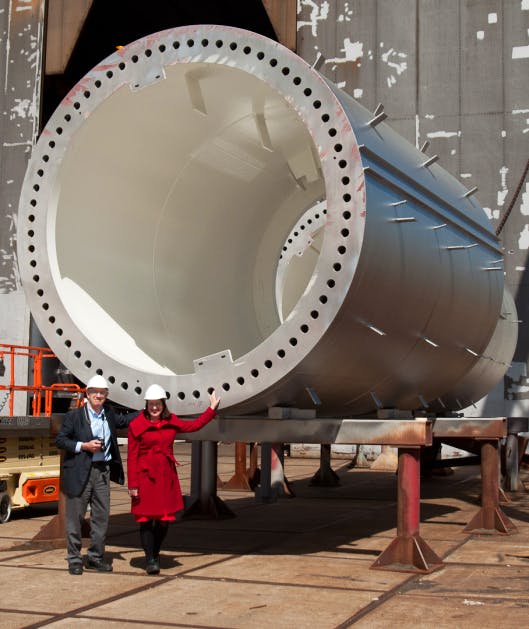 Architect David Marks and Eleanor Harris, the i360 chief executive, with the cans in Holland

We are anticipating the seafront to be busiest with people coming to watch the unloading in the afternoon and early evening, and we will have an information stall open next to the West Pier Arches and Alfresco restaurant from 3.30pm.

On the other side of our site, our neighbours at the Ice Café are opening early to welcome our barge and will be offering 20% discount on Small Batch coffee and teas between 5am and 11.30am. If you are coming down early, do pay them a visit.

Local band Steel Strum will also be playing their delightful guitar and calypso take on well-known songs. They are performing two free outdoor sets, one at 3.30pm and 4.30pm.

Eleanor Harris, chief executive at the i360, said she was looking forward to seeing the cans arrive on site.

She said: “This is a really exciting time for us and is another major milestone for the i360.

“The engineering techniques being used are really impressive and we are anticipating a lot of interest from people coming to the beach and watching the 100 metre-high crane in action.

“It will be fantastic to see the tower sections arriving and the tower will start taking shape soon.”